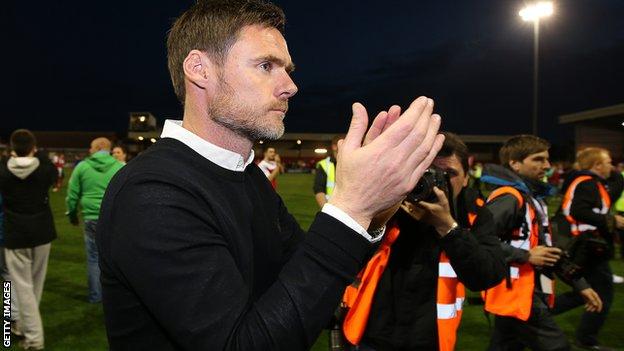 The Cod Army, who beat York in their semi-final, will face Burton on 26 May.

"We were the fourth team in the league and the highest-placed team in the play-offs, but you have to go out and earn it," he told BBC Radio Lancashire.

"We've earned it over 180 minutes against York. We deserve to be there and now we've got a very tough game to get where we want to be."

Fleetwood have played Burton four times already in the 2013-14 season, but have won just once.

The Brewers knocked Fleetwood out of the FA Cup after a second-round replay in December.

Alexander's side narrowly missed out on a trip to Wembley in the Johnstone's Paint Trophy earlier this year, losing in the northern area final to Chesterfield.

Fleetwood, in just their second season as a Football League club, were one of the favourites to win promotion from the fourth tier at the start of the campaign.

They fell five points short of going up automatically but edged past York 1-0 on aggregate, drawing Friday's second leg 0-0 in front of a sell-out crowd of more than 5,000 at Highbury.

"Getting to Wembley is the next step we wanted to take," added Alexander, who won promotion to the Premier League via the play-offs as a Burnley player in 2009.

"It's not the target, but it's the next step to our target, and we're really pleased to get there."