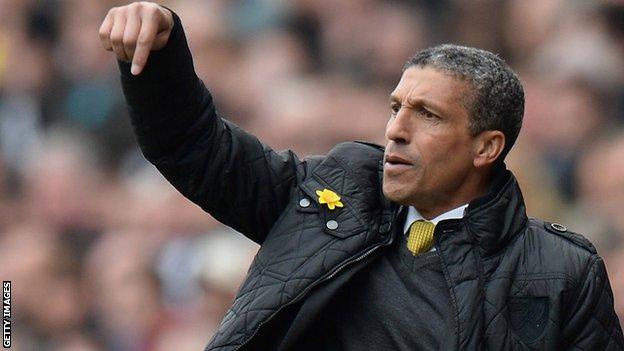 Hughton, 55, was replaced by Neil Adams in April, but the Canaries were still relegated from the Premier League.

"We didn't feel at that time there was anybody out there," Smith said.

"We got it wrong. It might have happened where if we got a caretaker manager we might have stayed up. But there was no guarantee."

Speaking to BBC Radio Norfolk, Smith said she felt the season seemed to have a "deadly curse" on it.

"Whatever we did didn't seem to work," she added.

Adams was promoted from youth-team coach to Norwich boss for the final five games of the season following the dismissal of Hughton.

The 48-year-old collected only one point from those five matches and the Canaries' three-year stay in the top flight was ended by a final day loss to Arsenal, their 21st defeat of the campaign.

However, Adams is on the shortlist to take over on a full-time basis at Carrow Road and chief executive David McNally said he was assured of a job at the club, even if he is overlooked for the manager's role.

"If he is not successful, he will certainly be involved in the management team going forward. As far as we are concerned, he has a long future at Norwich City," said McNally.

"He accepted the poisoned chalice and bravely managed the team through a really difficult period, and did well on and off the pitch in our view.

"The only thing against Neil, in terms of his application for the role, is his lack of experience."

Former Norwich defender Malky Mackay, 42, who settled his dispute with Cardiff last week following his sacking by the Bluebirds in December, is a strong candidate to be the Canaries next manager.

Gianfranco Zola, who, like Mackay is an ex-Watford boss, has also been linked to the job.

The club had aimed to make the appointment "within a week" of their relegation from the Premier League, but need more time to make the decision.

"I'm sure Norwich City fans are more concerned that we do the right thing rather than hit a deadline," said McNally.

He also confirmed the club will revamp its management structure, with the appointment of a technical director.

"We need the football manager to concentrate solely on trying to win football matches," he said.

"For us, a technical director means someone who is there to fully support the manager, so the manager can concentrate on the first team.

"Sport science, sports analysis, medicine, nutrition, hydration, rest and relax, conditioning, the management of injuries, the training ground, operations, the infrastructure and everything else will now be the domain of the technical director.

"Ultimately, we want our first-team manager to be involved with the ins and outs of players and he has to be responsible."