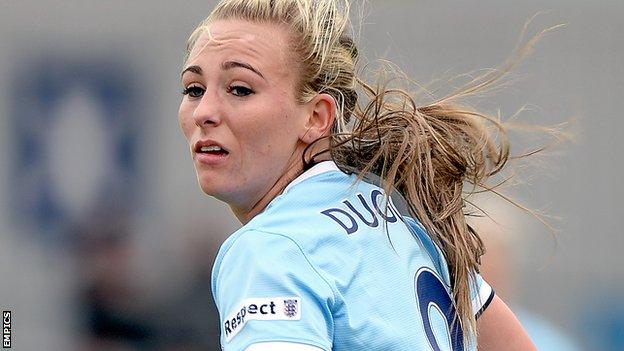 Manchester City's Toni Duggan says she will be "fully focused" on beating her former club Everton Ladies in the FA Women's Super League on Wednesday.

The WSL 1 fixture will be the first time she has faced her old side.

Injury prevented Duggan from featuring in the 1-0 victory over Everton in the Continental Cup on 4 May.

"It was probably a good thing that I wasn't a part of the game. It was a bit emotional," the 22-year-old England striker told BBC Radio Manchester.

"Now I can go into Wednesday fully focused on getting another three points on the board for Manchester City."

Duggan, who has scored eight times in England's ongoing World Cup qualifying campaign, was one of a number of high-profile signings made by Manchester City Women ahead of their entry into the top division of the new two-tier WSL system.

Nick Cushing's side lost their first two league matches to Liverpool and Bristol Academy, who finished first and second in the table in 2013.

But Duggan netted the only goal in Sunday's 1-0 win at Arsenal to give City their first points in WSL 1.

She continued: "From day one, it's been a happy camp. Even when we were getting beaten, the team stuck together and that's the biggest compliment I can give this group of players.

"The way we stick together and work together is amazing - probably the best I've been a part of."