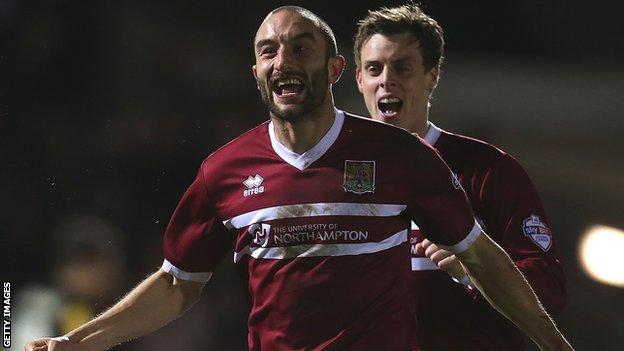 The 31-year-old has spent two seasons with the Cobblers, who narrowly avoided relegation from League Two this term.

"A lot of us have got points to prove and feel that this club can challenge at the top end of the league.

"I still feel fit as ever. I love playing football and stepping out in front of the fans so someone is going to have to tell me to stop," the 31-year-old told BBC Radio Northampton.

"You want to have promotions on your CV and I feel that we've got a great chance."

Hackett was still recovering from surgery at the start of the 2013/14 season, but still made 40 appearances last season, scoring twice.

"Having missed the whole pre-season and picked up niggling injuries through the season which stopped the momentum, it's nice to end the season injury-free," Hackett said.

"I'll have a good rest and hopefully get a good pre-season under the belt, to get that momentum going from day one rather than chasing the fitness the whole time."

Manager Chris Wilder has already signed striker Marc Richards and defender Zander Diamond as he shapes his squad for his first full season in charge at Sixfields.

And the manager is pleased to have also retained the services of the former Oxford and Millwall player.

"He is one of the most effective attacking players at this level. When he plays well, we play well," manager Chris Wilder told the club website.

"I was really keen to keep Chris. He is a big player for us and to have got this deal tied up so early is excellent news."