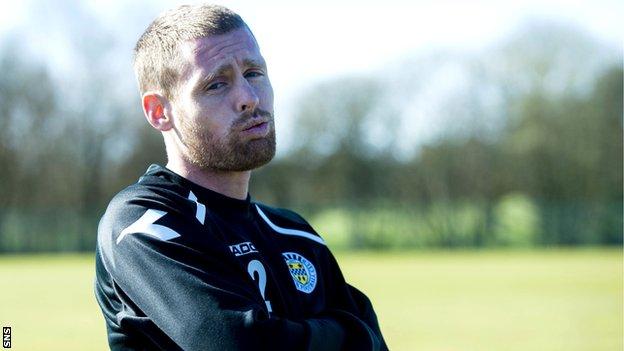 David van Zanten hopes to remain in Scottish football after announcing he is leaving St Mirren at the end of his four-year second stint in Paisley.

The 32-year-old Irish right-back, who returned to the Buddies after spells with Hibernian, Morton and Hamilton Accies, was not offered a new contract.

"My agent is working on finding me another club for next season," he said.

"My family are settled up here so there's no doubt I'd love to stay in Scotland at the highest level I can."

Van Zanten announced his departure on Twitter, saying he was "very sad", but later told BBC Scotland that it had not come as a surprise.

"The new manager, Tommy Craig, has decided I'm not going to be in his plans for next season," he said.

"It is obviously very difficult to hear that you're not wanted. But, to be honest, I was expecting it.

"I did not feature too much last season, so it didn't come as a shock and I had myself prepared for it."

It's been a great journey and the nine years have been, without doubt, the most enjoyable of my career

Dublin-born Van Zanten has spent his whole professional career in Scottish football, having joined Celtic from Tolka Rovers in 1999.

He moved to St Mirren in 2003, helped them win the Scottish Challenge Cup and promotion to the top flight before heading for one season with Hibs.

After spells with Morton and Hamilton, he returned to St Mirren Park as Danny Lennon's first signing as manager and won a Scottish League Cup winners' medal a year ago.

However, he lost his starting place in December and a subsequent hernia operation meant Van Zanten made the last of his 18 appearances this season from the substitute's bench in the final round of matches.

Now he follows Lennon, who was not offered a new contract, out of St Mirren Park.

"When I joined, we were fighting against relegation to the Second Division and, two years later, we won the First Division and the Bell's Cup as well and, from then, it's been onwards and upwards," said Van Zanten.

"It's been a great journey and the nine years have been, without doubt, the most enjoyable of my career and I'll look back on them with a lot of fond memories."

Van Zanten said the appointment of Craig, with senior players Jim Goodwin and Gary Teale as player-coaches, came out of the blue.

"I think everyone was surprised, even the players, who I think thought that, if Danny went, Tommy would go with him," he added.

"But Tommy is lucky he's got Jim and Gary in with him now and they'll know exactly what the players want and need, so I think it will be a good appointment for St Mirren.

"Danny has put down some good foundations at the club and there are a lot of good young players coming through."