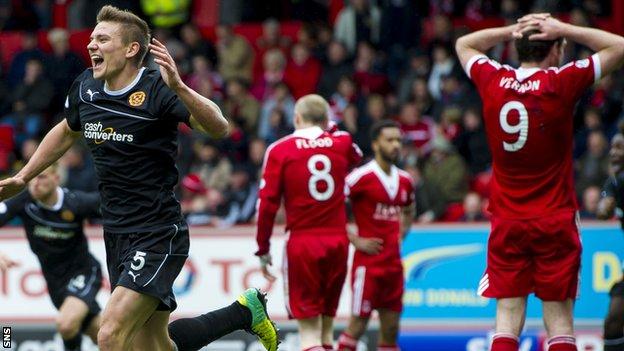 Aberdeen will play their opening fixture in the Europa League on 3 July - the day before the first two quarter-finals of the World Cup in Brazil.

And Celtic's Champions League qualifying round two fixture is on 15/16 July, two to three days after the final in Rio.

Motherwell and St Johnstone enter the Europa League in qualifying round two, with the first legs on 17 July.

The draws for both competitions will be held on 23 June.

Those early rounds, which have been confirmed by organising body Uefa, will present a particular challenge for Celtic manager Neil Lennon, whose side are in the Champions League after securing their third successive Scottish league title.

Lennon will be scouting for new talent at the World Cup finals, but time is not on his side should he wish to sign his targets - and have them fit and available - for the qualifiers.

Meanwhile, the Scottish champions' goalkeeper, Fraser Forster, is in England's squad for the World Cup finals, while defender Efe Ambrose is with Nigeria, left-back Emilio Izaguirre is with Honduras and midfielder Tom Rogic is heading to Brazil with Australia.

Forward Georgios Samaras has been named in the Greece squad but will not be returning to Celtic after the World Cup as he was not offered a new deal at the end of his current contract.

Aberdeen became the earliest starters among Scotland's four representatives this season after a final-day defeat at home by Motherwell meant they finished the season third in the Scottish Premiership.

Well's victory ensured they not only leapfrogged the Dons to become runners-up for a second season running but start their Europa League campaign a fortnight later.

St Johnstone became the country's third entrants in the competition after they defeated Dundee United in Saturday's Scottish Cup final and they start their campaign in the same round as Motherwell.

Europa League qualifying round one