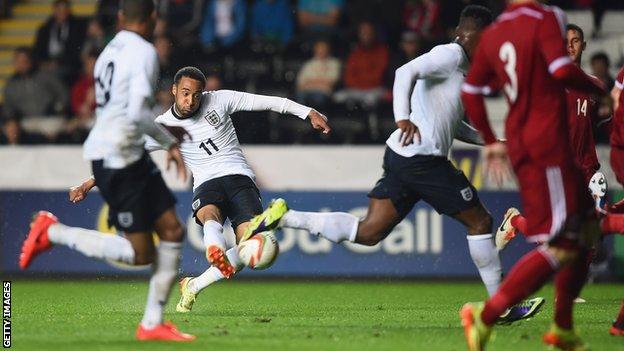 England Under-21s beat Wales Under-21s to claim a sixth successive win and move to the brink of qualifying for the play-offs to reach the Euro finals.

A Nathan Redmond hat-trick opened up a nine-point gap at the top of Group One and if Moldova fail to win in Finland on 1 June then England will advance.

Redmond dispossessed Lloyd Isgrove to score at the near post, before adding two more from the edge of the area.

Gwion Edwards had briefly brought Wales level when he headed in from a corner.

Despite their defeat at Swansea's Liberty Stadium, Wales' qualification hopes are not over as they remain three points behind Moldova, although having played a game more, and could possibly still claim one of the best runners-up spots.

The 10 group winners and four best runners-up will be paired off in two-legged play-offs to determine the seven sides that will join tournament hosts the Czech Republic in the finals in June 2015.

Redmond opened the scoring after catching Isgrove in possession, then cutting in from the left to score inside the near post as the defence stood off.

Wales were level within two minutes from a corner, as Edwards made a forceful run to the near post before out-jumping James Ward-Prowse to head in at his home stadium.

The hosts could have then gone ahead when Isgrove was played through, but Jack Butland stood tall in the England goal to deny the Southampton winger.

Connor Roberts needed to be equally alert in the opposite goal, as he produced a fine triple save to deny Danny Ings and two point-blank attempts from Jesse Lingard.

The goalkeeper, who left Cheltenham Town this week in search of first-team football, then did well at full stretch to push away a pile-driver from Luke Garbutt.

The top teams in each of the 10 qualifying groups as well as the four runners-up with the best records will advance to the play-off phase.

Seven two-legged play-offs will be held with the winners of each tie joining hosts Czech Republic in the 2015 Under-21 European Championship.

The Everton full-back had been a real thorn in Wales' side in the first half and another rampaging run down the hosts' right flank saw Garbutt find Lingard in space, who in turn set up Redmond to score his second.

Redmond could have sealed his hat-trick soon after half-time. The speedy Norwich forward left two Wales defenders in his wake but his shot struck the base of the post with Roberts beaten.

But with Wales struggling to get out of their half, it seemed only a matter of time before England increased their lead.

That the visitors did not score again until time added on was partly down to some sloppy finishing and determined last-ditch defending, but also to torrential rain that made the playing surface slippery and uncertain.

But Redmond sealed a deserved hat-trick at the death, as he picked up a loose ball before charging down on goal and unleashing another fierce shot from the edge of the area.