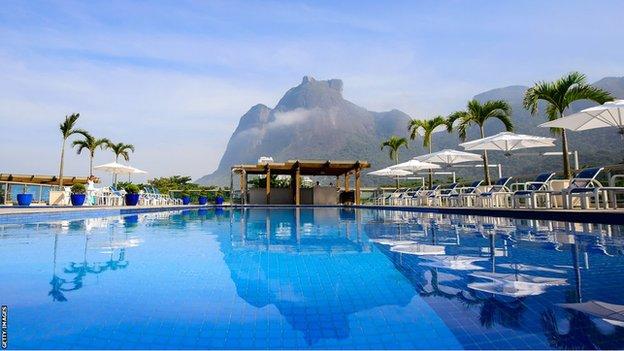 Two young men in small swimming trunks recline on sun loungers next to a pool. The sun is shining, there is not a cloud in the sky. Impeccably dressed hotel staff hover attentively. Women in bikinis float by.

FOOTBALLER 1: God I'm bored. Who are we playing next?

FOOTBALLER 2: Uruguay. Thursday. We've got another four days of this - training, lying about, watching DVDs. I'm not sure I can take it much longer.

FOOTBALLER 1: This is what the public don't understand about being an exorbitantly paid footballer playing for your country at a World Cup - it's so torturously dull. I bet our nurses don't have to put up with this.

FOOTBALLER 2: If only they knew that we're not really living, but merely existing in a gilded prison. How on earth will we fill the rest of our day?

FOOTBALLER 1: Another free round of golf at that exclusive course followed by dinner with the rest of the lads and a film in the hotel cinema.

FOOTBALLER 2: Damn that exclusive golf course, damn the lads, damn that hotel cinema… Anyone fancy a game of Call of Duty?

But I suspect there is not much sympathy among the people of England for fabulously rich footballers acting out the dreams of millions and complaining that, actually - and you might be surprised to learn this - it is all a little bit boring.

After all, what will you be doing this June? Grafting, probably. Just like you always do. But also hoping beyond hope that Roy Hodgson's young squad can brighten up an evening or two. If only they can rise above the weariness.

At the last World Cup, John Terry and Wayne Rooney complained of being cooped up in England's remote camp in Rustenburg. "Mini darts tournaments, snooker and pool," was how Terry described the daily routine in South Africa. "A bit of boredom kicks in."

As such, Hodgson has already been asked how he plans to alleviate ennui in Rio de Janeiro, where England will be based for the group stages.

Not surprisingly, Hodgson, a noted bibliophile who might while away any spare time he has at the five-star Royal Tulip Hotel getting stuck into a Brazilian novel or two - Paulo Coelho's The Alchemist perhaps? - was having none of it. 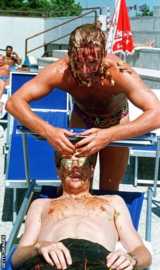 "It's a complete nonsense," said Hodgson. "I don't think it's our job to keep the players occupied. Some of them will go to the World Cup and play badly and say to you guys, 'I was bored.' And you'll write, 'Poor fella'."

Actually, probably not. At least judging by the reaction from the former England tourists we canvassed.

"If you can't get excited about being at a World Cup then you shouldn't be playing football," said former England defender Danny Mills, who represented his country at the 2002 World Cup in South Korea and Japan.

"I went into it thinking, 'This is five weeks of my life, maximum, at the biggest tournament on the planet. It's not a big sacrifice.' If you can't sort your head out for a World Cup, it's not just boredom that's an issue."

Former England winger John Barnes, who represented England at Mexico '86 and Italia '90, looked upon a World Cup as a lads' break - without the drinking of daft cocktails, all-night clubbing and practical jokes. Unless Paul Gascoigne happened to be your room-mate.

"You're at a World Cup, staying in a great hotel with loads to do, the weather is good," said Barnes. "Gazza would get bored pretty much anywhere but he enjoyed the World Cup because it was like going on holiday with his mates.

"This whole idea of boredom is ridiculous. It's not up to the coach to get across a sense of excitement and adventure, because that should come from when you play. It's a coach's job to get you focused on trying to do well in those games."

"We'd have a little bet," said Lineker. "Peter Shilton and I were the bookies. And once the tournament started, we had games to watch." Lineker, as archaic as it might sound, also liked to bury himself in a book.

Mills says he and the rest of Sven-Goran Eriksson's 2002 squad would sit round the dining table, have a cup of tea and - shock of shocks - have a bit of a chat.

"Training was ultra-competitive, fierce, one of the most intense atmospheres I'd been in," said Mills. "It made everyone very tired so we needed rest periods. The massage room also became a place to hang out and discuss this and that."

While 'Beckham-mania' made it difficult for England's players to roam free in Japan - "anyone wearing England kit would get mobbed," said Mills - Hodgson's players are unlikely to be allowed to stray too far from their hotel, especially given the close proximity of one or two lively favelas.

But there is a world-class golf course next door, as well as an upmarket shopping mall. Two floors of the hotel have been reserved for the England squad and technical staff, who will have sole use of the gym and swimming pool for a few hours each day.

There is also a dedicated video games room, so Hodgson's boys can at least win the World Cup on their Xbox.

All of this might make modern footballers sound horribly spoilt and needy. But player boredom at major tournaments is not a new phenomenon. England legend Jimmy Greaves said he was "miserable" at the 1962 World Cup in Chile and found the build-up to the 1966 World Cup "claustrophobic".

And here's an excerpt from journalist Jeff Dawson's diary of the 1970 World Cup, written the day Sir Alf Ramsey's squad left for Mexico: "With 28 energetic young men now deprived of access to wives and girlfriends, not to mention drink, Ramsey will have his work cut out to halt the onset of boredom."

Then again, perhaps players of that era had more reason to be bored at a World Cup than modern players, given the far greater freedom they had when back home playing for their clubs. After all, Ramsey's skipper Bobby Moore used to advertise public houses, imploring the British public to "look in at the local", have a pint of mild and a game of arrows.

"For players nowadays, being at a tournament is not much different from being at home," said Barnes. "I suppose they're out of their comfort zone, away from home and away from their family. But what do players normally do after training finishes? It's not as if they spend all week down the pub drinking."

As Barnes suggests, a footballer with a young family is more likely to spend his time after training hanging out with his partner and kids than sinking pints. But the idea that wives, girlfriends and children should be invited to major tournaments as an antidote to boredom is currently anathema.

The 2006 World Cup in Germany, where the players' other halves transformed the sleepy spa town of Baden-Baden into a month-long episode of TOWIE, cemented the idea that 'Wags' and World Cups don't go.

As such, spouses and partners have not been invited to Rio. Even England midfielder Steven Gerrard, husband of blonde stunner Alex Curran (not my words, the words of Nuts magazine), has admitted that he is better off without her, for a few weeks at least.

"My family are the most important thing on the planet," said Mills. "But I didn't want them near me at the World Cup.

When I played for Belgium we used to stay in monasteries and it was so boring. I want my players to have something to do

"If they're round the corner, you naturally want to see them all the time. But if they're thousands of miles away and you get a phone call saying 'the kids are this, the kids are that', you think, 'I'm glad I'm not there.' To win tournaments, you have to concentrate on yourself. You have to be selfish."

Even so, there are coaches who believe that keeping boredom at bay is a central part of their brief.

Belgium manager Marc Wilmots has arranged for two lorry-loads of trout to be dumped into a lake near the team hotel so his players can go fishing. "When I played for Belgium we used to stay in monasteries and it was so boring," said Wilmots. "I want my players to have something to do."

Indeed, more sympathetic fans will recognise that boredom is part of the human condition and that anyone left to their own devices for hours on end, however sunny it is, is likely to feel at least a twinge of it.

As such, the real crime of Terry and Rooney was not that they felt bored at a World Cup, but the fact they felt compelled to tell everyone.

"This whole boredom thing has become quite fashionable," added Lineker. "And it tends to come around when a team is not playing very well and results are going against them.

"It's almost used as an excuse. Boredom during a World Cup? It's what you wait for the whole of your footballing life."

FOOTBALLER 1: Ah well, that's that for another four years.

FOOTBALLER 2: Pity those poor Germans and their efficient penalty-taking and high boredom thresholds - they're here for another fortnight...