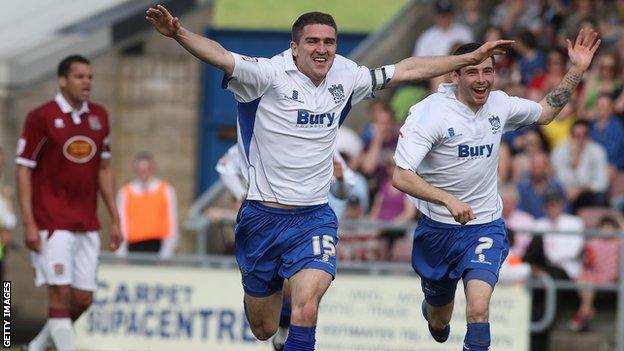 The 35-year-old had a year left to run on his deal with relegated Tranmere, but has moved for an undisclosed fee.

Lowe made 50 appearances last term after joining Rovers on a free transfer from MK Dons, but his 20 goals were not enough to save them from dropping into the fourth tier.

Twenty-eight of those came during that campaign, including a run of scoring in nine consecutive matches to set a new club record, and he was also named the division's player of the year.

They've gone out to get someone like me, who's an old player from previous years, to come back and help that revolution

Bury have now made three summer signings, with midfielders Danny Mayor and Nicky Adams having agreed permanent moves to the Shakers from Sheffield Wednesday and Rotherham respectively.

"I'm over the moon and more than happy to be here," Lowe told the club website.

"It's good that the chairman [Stewart Day] come in and he's investing his money. I have to thank him for making this transfer happen.

"They've gone out to get someone like me, who's an old player from previous years, to come back and help that revolution. He's sold the club to not just me, but to other people."

In a statement on Tranmere's website, Rovers chief executive Jeremy Butler said the fee they have received for Lowe's services was "excellent value".

He added: "Since the season ended, Ryan has spoken publicly about his need to sign a new extended contract.

"We do not feel it is prudent for Tranmere Rovers to give a 35-year-old player an improved two-year contract when he still has 12 months left to run on his current deal.

"The money will be put into the budget to sign new players for next season. We would like to take this opportunity to thank Ryan for his contribution in the year he was with us."