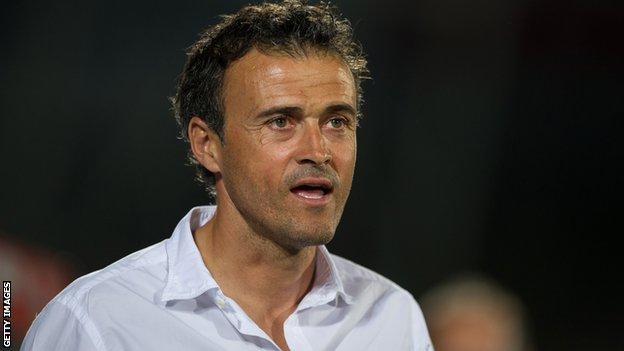 Barcelona have appointed Luis Enrique as their new first-team coach on a two-year deal.

The 44-year-old former Barca player, who managed the club's B team between 2008 and 2011, left his role as Celta Vigo boss last week.

He replaces Gerardo Martino, who left after Barca finished second to Atletico Madrid in La Liga.

Martino, who succeeded the late Tito Vilanova last summer, ended his two-year deal by mutual consent earlier this week after Barca failed to win the Spanish title for only the second time in six years.

They drew with champions Atletico Madrid on the final day when a win would have given them the title.

Vilanova, who died in April, took charge in June 2012 but underwent surgery for throat cancer in December that year.

He returned to the role in March 2013 to see his side take the Spanish title in his sole season in charge before stepping down as coach.

Enrique's arrival had been widely expected because of his strong links with the club, although he said he did not know who he would be managing next season after leaving Celta, who finished ninth in La Liga.

Celta, meanwhile, have appointed Eduardo Berizzo, who was coaching O'Higgins in Chile, as their new boss on a two-year deal.

After succeeding Pep Guardiola as B team boss, Enrique secured promotion to the Spanish second division for the first time in 11 years in 2010 with a record points haul.

He left the role to join Italian side Roma for a season but, after a year at Celta, he returns to the Nou Camp for a third spell.

A versatile midfielder and attacker, Enrique made 300 appearances for Barca between 1996 and 2004, including a two-year spell as captain.

After joining the Catalans from rivals Real Madrid on a free transfer, the Spaniard won two La Liga titles, two Spanish cups and the Uefa Cup.

His return to Barca as first-team boss sees him follow in the footsteps of Guardiola, the only other man to be the club's captain, B team coach and first-team manager.

The appointment comes on the same day as the signing of Borussia Monchengladbach goalkeeper Marc-Andre Ter Stegen, and Lionel Messi signing a new deal.