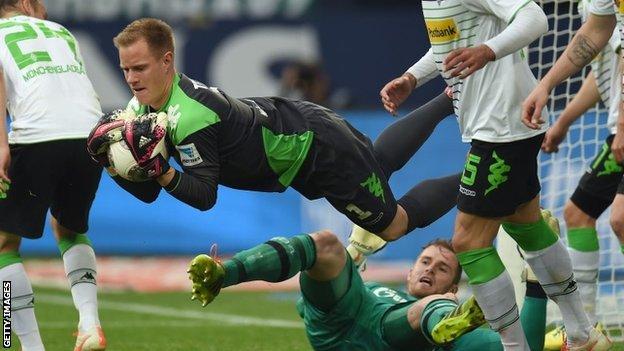 The 22-year-old Germany international is likely to be the club's number one next season with Victor Valdes and Jose Manuel Pinto both out of contract and leaving the Nou Camp.

The signing comes on the same day as the appointment of Luis Enrique as boss and Lionel Messi signing a new deal.

It was made possible after the club appealed against a transfer ban.

In April, they were handed a 14-month ban, which is on hold pending their appeal, after breaching rules on signing international players under the age of 18.

Ter Stegen, who is not in Germany's World Cup squad, played all 34 of Gladbach's Bundesliga games this season as they finished sixth.

Barca have been strongly linked to the keeper, who has signed a five-year deal, since Valdes announced he would leave the club this summer.