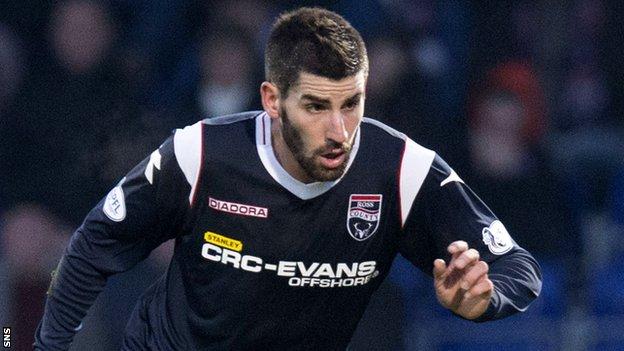 The 26-year-old Oikonomou rejoined County in January after a spell back in his homeland with Veria.

He was quoted in April as saying he would like to remain with the Dingwall club should they avoid relegation.

But, while announcing one-year deals for the other two, County said the defender would again return to Greece.

Manager Derek Adams told his club website: "It is great news that both Mark and Steven have signed up for next season, with Mark also taking on the extra responsibility of full-time goalkeeping coach."

Saunders, 23, who had suffered serious injuries while with previous club Motherwell, has only made four starts and nine appearances from the bench for County since joining Adams's squad for their second season in the Scottish Premiership last summer.

Brown joined County in 2012 after leaving Hibernian and the 33-year-old has made 30 appearances this season.

It had already been announced that goalkeeper Michael Fraser, who only made 10 appearances this season as Brown's understudy, midfielder Alex Cooper, striker Gary Glen and assistant manager Neale Cooper would be leaving County after the end of the season.

The latest to exit is Oikonomou, who made 18 appearances for County in his first six-month spell with County, arriving in January 2013 after leaving Atromitos.

He made a further 15 appearances this season but was left out of the starting line-up for the final four games of the season as County battled successfully to avoid a relegation play-off place.

"I would also like to take this opportunity to thank Evangelos Oikonomou for his services to the football club in his two spells here," said Adams.

Meanwhile, the manager expressed delight for January loan signings Erik Cikos and Filip Kiss after they were called up to the Slovakia squad to face Russia and Montenegro.

"Filip was in the squad earlier in the season for the first time and now Erik has been called up," added Adams.

"Both of them performed well for us, so I'm glad to see that being recognised with their selection."