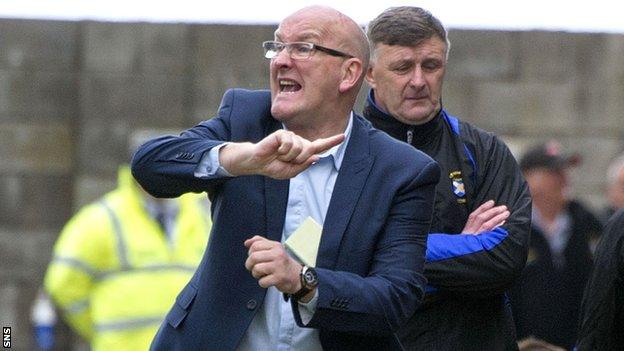 Jim Duffy says a return to full-time football was the reason he could not resist leaving Clyde to become manager of relegated Morton.

The 55-year-old former defender played for the Greenock club for three years after leaving Celtic in 1982.

"The chairman believes he can sustain full-time football and it is great as I've been part-time for five years with Brechin City then Clyde," he said.

"So it was too good an opportunity to turn down."

Duffy, who also played for Dundee and Partick Thistle before managing Falkirk, Dundee, Hibernian and Brechin City and having a spell as caretaker at Norwich City, had been with Clyde since 2011.

"The Morton chairman, Douglas Rae, phoned the Clyde chairman, John Alexander, on Friday to ask for permission to speak to me. John gave permission," the told BBC Scotland.

"I hadn't heard anything over the weekend and I thought they had decided to go down a different route."

Morton were seeking a new boss after Kenny Shiels stood down following their relegation, having finished bottom of the Scottish Championship, their season culminating in a 10-2 hammering by promotion hopefuls Hamilton Academical on the final day of the season.

Duffy was relishing the challenge of restoring Morton's fortunes while stressing that it would be "extremely tough" in League One next season.

He insisted that he had no thoughts of leaving Clyde until Morton's approach.

"I was absolutely delighted to be the manager of Clyde," he said. "We had made an awful lot of inroads into taking the club to a different level at all levels and I think we had managed to do that.

"Financially, the club was in a much more stable position."

Morton could have been Clyde's opponents in League One next season had Duffy's side not fallen short in dramatic fashion in the play-offs.

A 4-1 defeat away to Stirling Albion on the final day of the League Two season allowed the Binos to leapfrog Clyde into third spot.

That meant the Bully Wee faced East Fife, who finished second bottom of League One, in their semi-final while Stirling took on Annan Athletic.

Although Clyde won their first leg 1-0, they lost the second 2-1 and failed with three penalties that would have taken to the final before losing 7-6 in the shoot-out.

The Fifers will be joining the Bully Wee in League Two next season after losing to Stirling, who are now promoted, in the final.

Clyde said in a website statement: "Clyde FC can confirm that Jim Duffy has resigned from his position as first-team manager.

"Jim has accepted the offer of becoming manager of Greenock Morton.

"The club wishes to thank Jim for his work during his time at the Bully Wee and we wish him every success for the future."