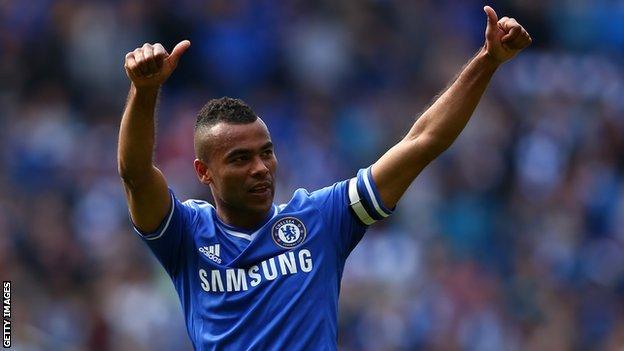 Ashley Cole says he does not think he will be at Chelsea next season and is seeking "another journey in my life" after eight years at Stamford Bridge.

The 33-year-old left-back, who announced his England retirement after 107 caps earlier this month, is out of contract this summer.

"I am weighing up my options for playing next season with my agent," Cole wrote on Twitter.

"Sadly, it does not look like Chelsea will be one of them."

Cole helped Chelsea win the Premier League title in 2010 as well as the 2012 Champions League.

He has also won four FA Cups with the Blues, to add to the three he secured with Arsenal, following his move to Stamford Bridge from the Gunners in August 2006.

Cole won the 2007 League Cup with Chelsea and was part of the club's Europa League triumph under interim manager Rafael Benitez in 2013.

But he endured a frustrating 2013-14 campaign under returning manager Jose Mourinho, starting just 15 Premier League games in a trophy-less season for the Blues.

"Now I'll be looking for another journey in my life," added Cole. "I hope it can be like my others, full of fun and of course win something."

Cole signed a one-year extension to his Chelsea contract, which was due to expire last summer, in January 2013.

But with a new deal at Stamford Bridge looking unlikely, Cole has resigned himself to leaving after 229 Premier League appearances.

"Thank you Chelsea for making my eight years a pleasure. We've been through a lot, good and bad," continued Cole.

"And of course the fans. How do I start, I can only say thank you for giving the boys confidence to win some amazing trophies.

"To the fans that have stood buy me through thick and thin, I will always have you in my heart."

Earlier this month, Chelsea boss Mourinho said he did not think Cole would leave the club.

"I don't know but I don't think so. The club knows my opinion," said the Portuguese.

"I thought the way Ashley dealt with being left out of the set-up for the World Cup was admirable, very professional. He's got a lot to offer. They'll be several clubs thinking that he can still do a job for them and I think he can. He's still a top player so I would imagine that there will be several clubs looking at his situation."

But the future of long-serving midfielder Frank Lampard, who is also out of contract this summer, has yet to be decided.

Cole retired from international football earlier this month after manager Roy Hodgson left him out of England's World Cup squad.

He made his international debut against Albania in March 2001 and went on to become only the seventh England player to reach a century of caps when he appeared in a friendly win over Brazil in February 2013.

Former Liverpool defender Alan Hansen, on his final Match of the Day appearance, said Cole was one of the greatest players the Premier League has seen.

"As a full-back for Arsenal, Chelsea and England there is nobody better in Premier League history," said the eight-time title winner.

"I would have taken him [to the World Cup] but I can understand why Roy Hodgson hasn't.

"I watched him play in the Champions League and against Liverpool and he was excellent.

"But he hasn't been playing a lot and that's probably the reason why Roy hasn't taken him."