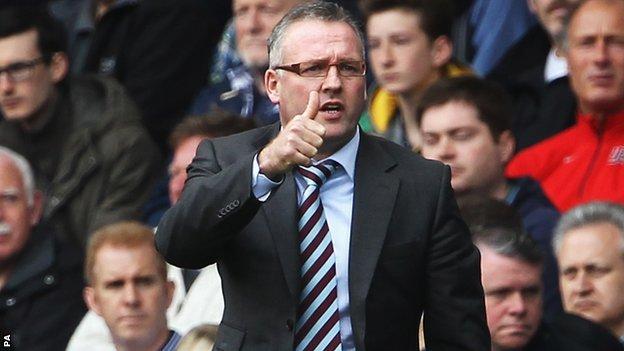 Paul Lambert will remain as Aston Villa manager at least until the Premier League club is sold - and he has been given permission by owner Randy Lerner to start rebuilding the squad.

But Lambert admits that finding new, better players will not prove easy.

"We need bigger and better players," he told BBC Sport. "You need to spend a lot of just to stand still. It won't be easy within the current circumstances.

"Paul Lambert will stay as Aston Villa manager for the time being. At least until the club is sold.

"Randy Lerner told him over a two-day debriefing session in New York that it's business as usual while the club's future is being sorted out and that the manager can get on with the buying and selling of players when necessary.

"Funds have not been frozen if new signings are needed, within the recent financial parameters at Villa.

"Lambert still has a year left on his contract and his position is only secure while Mr Lerner runs Villa.

"I understand there is still no firm interest in buying the club, although that process has only just started."

"It's a challenging time ahead for everyone at the football club."

Lambert suffered a disappointing second season at Villa Park, in which the club finished 15th, he lost the backing of many fans and owner Lerner opted to sell up after eight years at the helm.

And Lambert knows that his job would probably be under threat if new owners took over from American businessman Lerner, who has run the club from across the Atlantic since 2006.

But, although he flew to New York last week with Villa chief executive Paul Faulkner for an end-of-season discussion, Lambert is as uncertain as any fan on the timescale of just how long any takeover might take.

"The chairman has been honest and told everyone wants to going to happen, that the club's up for sale," added Lambert. "And whatever market that hits, we'll have to see what happens.

"There's nothing imminent. I don't know how long it takes to sell a football club. It's not like you're selling a car or a house."

Lambert's immediate concern is try to get everyone pulling in the same direction following a turbulent season.

"You wouldn't get too many clubs in this scenario," he admitted. "But sometimes adversity pulls people together.

"The fans are vital to this. You either quit or you meet it head on.

"We're going to roll up our sleeves, prepare for the battle ahead and I'm determined to give it everything I have, the players will do the same and it is our collective strength as a club which, ultimately, will see us through."

Albrighton, who has been with Villa since the age of 8, is a reported target for promoted Leicester City.

He made nine Premier League starts this season, after going out on loan to Championship side Wigan Athletic, which took his total of career appearances for the club to 101.

Delfouneso, who has also spent time out on loan at Burnley, Leicester City and Blackpool in his six years on Villa's books, finished the season loan with League One side Coventry City.

Another young striker Nicklas Helenius also looks set to leave the club after just one season at Villa Park.

Following his move from Aalborg on a three-year deal last summer, the 23-year-old Denmark international has not started a game, scoring just once in six substitute appearances.

His representative Mads Bach Lund said on Twitter: "Villa are not counting on Nicklas Helenius as a part of the squad next season. Pity, but we are looking forward instead of backwards."