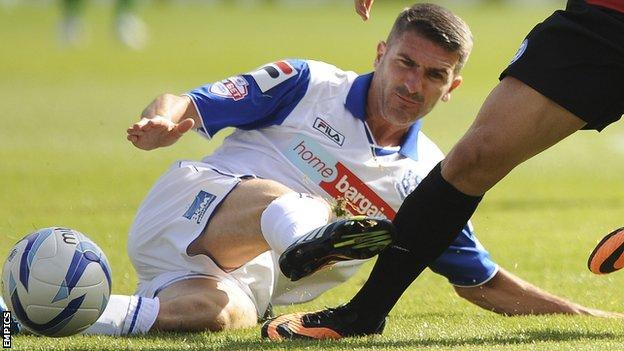 Ryan Lowe says Championship clubs were interested in signing him before he left Tranmere to join former club Bury.

The Shakers paid an undisclosed fee to sign the 35-year-old striker from relegated Tranmere Rovers.

"Championship clubs came in late on with a bit of interest and there were offers on the table from League One clubs," Lowe told BBC Radio Manchester.

"For me to come back to Bury shows what they're all about and what their determination is to climb the leagues."

Lowe initially joined Bury in the summer of 2009 and scored 53 goals in 100 games before leaving for Sheffield Wednesday in August 2011.

He netted 28 times in the second of his two full seasons with the Shakers, including in nine consecutive games to set a new club record, to help them into League One.

Tranmere were relegated from the third tier earlier this month despite Lowe's 20 goals last term.

"I didn't really want to be playing League Two because of the goals I'd scored in League One last season," he continued.

"I was quite happy playing in that league. I felt comfortable, but the minute I had a chat with everyone at Bury, there was only one place I was going to go.

"They've paid some good money for me and they've got me there on a decent contract. I need to pay them back now."

And Lowe is confident he can repeat his previous success by helping David Flitcroft's side into League One next season.

"I watched them against Bristol Rovers [in April] and they were a good outfit then," said Lowe.

"Obviously with the additions of myself, Nicky Adams and maybe one or two more along the way, I think we're going to have a successful season."