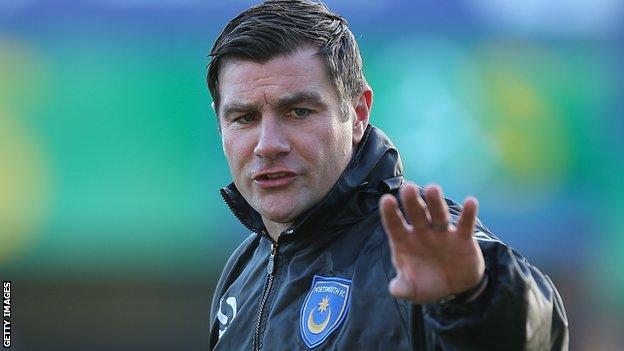 Former Portsmouth boss Richie Barker will stay on full-time as head of coaching at MK Dons.

The 38-year-old, who was sacked by Pompey in March, was appointed as Karl Robinson's assistant at Stadium MK for the final six weeks of the season.

He has also had managerial spells at Bury and Crawley.

"Once we sat down and had the discussion, it didn't take very long to be honest."

Meanwhile, Robinson is expecting chairman Pete Winkelman to back a push for promotion in the next campaign.

The Dons have missed out on the League One play-offs for the past two years after finishing in the top six for three out of the four previous seasons.

"The chairman has said we're going to be having a bit of a go next year. And that's music to my ears," Robinson told BBC Three Counties Radio.

"I'm still fighting hard to bring as many top players in as possible.

"I'll put them to the board and then we'll wait and see."

MK, who will be entering their seventh consecutive season in League One after the summer, were in play-off contention this time around until taking just two points from their final five games.

Sections of the support have called for stronger investment in the playing squad, with Robinson already in talks with players.

Full-back Jay McEveley, who has been released by Swindon after making 37 appearances this season, has been linked with a move to join fellow Liverpudlian Robinson at Stadium MK.

"I've known Jay for a long time, he's a friend of my brother," said Robinson of the 29-year-old.

"I think rumours started when Swindon played Peterborough and he got sent off and came and sat next to me.

"He's someone I've always been an admirer of and we're looking for players of that calibre."