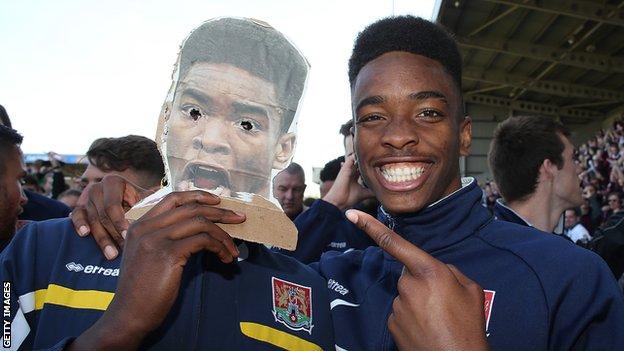 The 18-year-old Northampton-born academy product scored three times in the last two games of the season to help keep the Cobblers in League Two.

"Everyone saw the impact Ivan made at the end of the season and we were keen to tie him down to a longer deal," said manager Chris Wilder.

"We are the excited about the progress he as an individual and we as a club could make in the next three years."

Toney made his senior debut, aged 16, by coming off the bench in a FA Cup tie at Bradford City.

He could have a very bright future in the game

Thirteen of his first 14 appearances were off the bench before his two goals at Dagenham & Redbridge, and another in the 3-1 victory over Oxford.

"He already had two years left on his contract anyway, but we wanted to offer him improved terms for a longer period that more accurately reflects the progress he has made," added Wilder.

"He has still got a long way to go and Ivan knows that competition for places will be tough next season, but if he keeps working hard and progressing he could have a very bright future in the game."

Northampton have Toney, Emile Sinclair and new signing Marc Richards as strikers for next season, while Alex Nicholls is being given a chance to prove his fitness in pre-season and David Moyo is considering a contract offer.