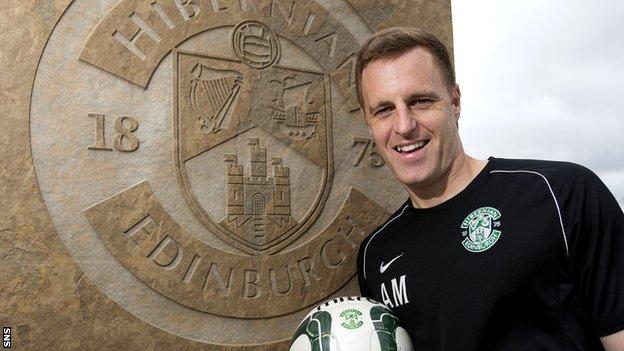 Hibernian have done their homework and remain confident they can end a difficult season on a high against Hamilton Accies, says Alan Maybury.

But the veteran Hibs defender says it means there can be no excuses if they are relegated after their play-off.

We've had chance after chance over the last couple of weeks and we've not taken them, but this is it now and we have to make sure we come out on top

"Confidence is good, there's still a fight and togetherness about the team, so there's no doom and gloom," Maybury told BBC Scotland.

"We've got another opportunity, we're prepared and we must grasp this one."

Hamilton, who finished runners-up in the Scottish Championship and beat Falkirk in the play-off semi-final to keep their promotion hopes alive, host Wednesday's first leg on their artificial surface.

"We've done our homework on it, we've trained on it and I think quite a few of the boys might have played on Hamilton's pitch earlier in the season in under-20s games, so there's no excuse," said 35-year-old Maybury.

"We've done our homework on Falkirk and Hamilton and, once we knew it was Hamilton, fine-tuned what we've done to make sure we are ready."

While Accies have only lost once in 15 matches, Hibs have not won in 13 and finished second bottom in the Premiership after a final-day defeat at home to Kilmarnock.

"It's been a disappointing season, but we've got another opportunity to get the club out of the situation we're in," said the Irish defender.

"We've had chance after chance over the last couple of weeks and we've not taken them, but we have to make sure we come out on top.

"There is still a belief and confidence in the squad and what's been levelled at us all season is that we should have done a lot better.

"We know the ability is there. It is not through a lack of hard work or effort that we're there. It is something we need to sit down in the cold light of day to work out quite why we are here."

It is being viewed by both clubs as a two-leg final, something that Hibs manager Terry Butcher has experience of when winning the Uefa Cup with Ipswich Town in 1981.

"For us, it's a whole new competition now," said the Englishman. "It is a two-match series.

"I played in the final of the Uefa Cup many years ago, won 3-0 and lost 4-2 and eventually won the trophy.

"There's a different significance to the game than something like a Uefa Cup final, but we know the importance of it and are raring to go."

Butcher is pleased at the way his players have trained on the artificial pitch at Lowland League club Spartans.

"When you have had the disappointment that we've had, the best way to get rid of that is to work hard and the players have certainly done that," he said.

"We know why we're in this position - we haven't scored enough goals, it's as simple as that - but there are other factors as well.

"But we don't look at what we haven't done. It's what we can do and what we have to do in these two games.

"We get another two bites at the cherry, so to speak, and we want to make sure that we secure ourselves in the Premiership for next season."