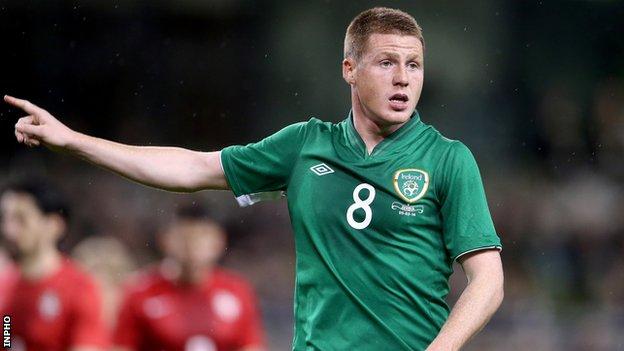 Everton midfielder James McCarthy has been ruled out of the Republic of Ireland's four upcoming friendlies because of an ankle injury.

Stephen Ireland remains absent despite speculation that he could be a late addition to the squad.

The Stoke midfielder, 27, has been in international exile since 2007.

O'Neill's side open their series of friendlies against Turkey at the Aviva Stadium on 25 May before taking on Italy six days later at Craven Cottage.

Two games in the United States start with a Philadelphia encounter on 6 June against Costa Rica followed four days later by a meeting with Portugal in New Jersey.

Uncapped Newcastle goalkeeper Rob Elliot, who sits out his own stag do in Las Vegas for the games, will miss the match with Italy so he can get married.

His wife will meet him out in the United States after the Portugal game so they can begin their honeymoon.

Midfielder Ireland has not played for his country since he lied about the death of both of his grandmothers after pulling out of an Irish squad seven years ago.

Earlier this month, manager Martin O'Neill said the door remained open for a Republic of Ireland recall for the Cork man but that the ex-Manchester City player had to make his intentions clear.

West Ham defender O'Brien will miss the four internationals in order to manage his off season medical programme.

O'Brien dislocated a shoulder in January, although he was in the Hammers team which lost 2-0 to Premier League champions Manchester City nine days ago.

The 28-year-old former Bolton full-back's career has been hindered by knee injuries.