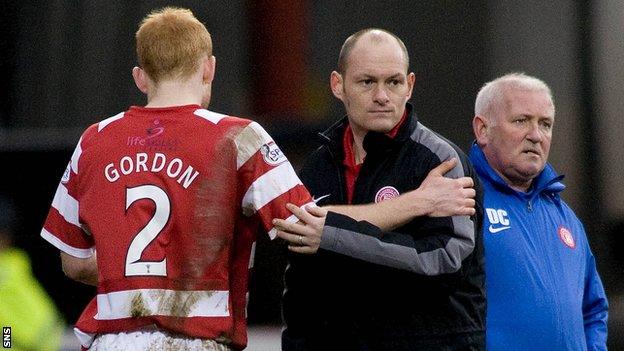 Hamilton Academical player-manager Alex Neil insists his team will be attacking Hibernian from the start when the two sides meet on Wednesday.

Championship side Accies host Premiership Hibs in the first leg of a play-off that will decide which team starts next season in the top flight.

"We've got to try and put Hibs on the back foot as quickly as we can and force the issue," said Neil.

"We certainly won't be parking the bus. Our biggest strength is attacking."

We're the highest scorers in our league. We've got to try and take that into the game

Neil hinted that he knows what his team will be for the first leg at New Douglas Park.

But the midfielder, who was suspended for the two legs of the semi-final win over Falkirk, would not reveal whether or not he will select himself in the starting line-up.

"If I think it's best to put myself in and we've got a better chance of winning the game then I'll do that," he explained. "If not, then I won't.

"We've been playing really well. I think we've only lost one in 15, so we've got great momentum.

"We're the highest scorers in our league. We've got to try and take that into the game.

"This is our one crack at it. We've got a good opportunity to play a Premiership team and see where we are, so we won't be changing tack.

"They've got to show that they're good enough to go into the Premiership."

Accies entered the play-offs after finishing second in the Championship and narrowly missing out on the title and automatic promotion.

The league race went right to the last round of fixtures and Hamilton's 10-2 win over Greenock Morton would have been enough to topple leaders Dundee had the latter not won their meeting with Dumbarton 2-1.

"This is their second chance of going up," said Neil. "We're disappointed we didn't go up automatically.

"They won't need any motivation. If anything, we'll need to calm them down and make sure they're focused on the job at hand.

Neil believes the unfamiliarity of the artificial surface at New Douglas Park could work against Hibs.

"Hopefully, we can take advantage of that and we'll do as best we can," he added.

"It lends itself to the way we play in terms of getting the ball down, passing it; good quick, sharp movements. Middle-to-front, we've been really, really good this season and hopefully we continue that."