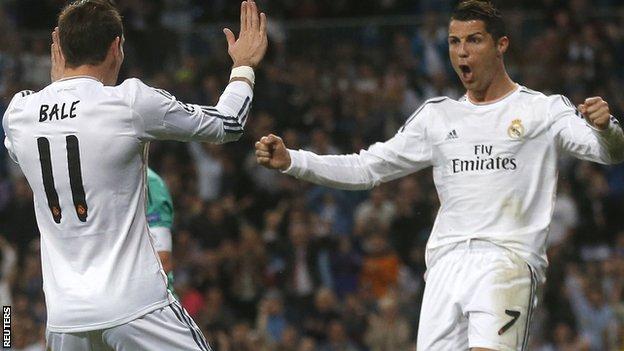 Cristiano Ronaldo and Gareth Bale will be fit to play for Real Madrid in Saturday's Champions League final against Atletico Madrid.

"The two of them are going to play," said manager Carlo Ancelotti, who could win a third European Cup. "That is what is important for us."

Defender Pepe and striker Karim Benzema remain doubts for the final in Lisbon.

Benzema suffered an abductor injury in Real's 3-1 win over Espanyol at the weekend, whilst Pepe has been out of action since suffering a calf strain two weeks ago.

The pair also missed training on Tuesday, but it is the fitness of Bale and Ronaldo - the two most expensive players of all time - which has drawn focus ahead of Saturday's final.

Together, they have contributed 68 goals for Los Blancos in all competitions this season.

Wales international Bale returned from a two-week lay-off with a goal in a 3-1 win over Espanyol on Saturday.

He completed a specific weights workout in the gym rather than train with the team on Tuesday according to Ancelotti, while Ronaldo expects to be ready to play in his third Champions League final.

"Every player in the world suffers from injuries and the important thing is I feel good and come Saturday I will be at my best level," said Ronaldo, who won one final and lost another with Manchester United.

A third win for Carlo?

"I have had some bad luck and small problems towards the end of the season, but it is normal."

Madrid are bidding to win a 10th European Cup and will end a 12-year wait for the continent's top club prize if they beat the new La Liga champions - in the first ever European Cup final derby.

The sides have already met four times this season, with Real emerging as 5-0 victors over two legs in the Spanish Cup and Atletico claiming a win and a draw in the league meetings.