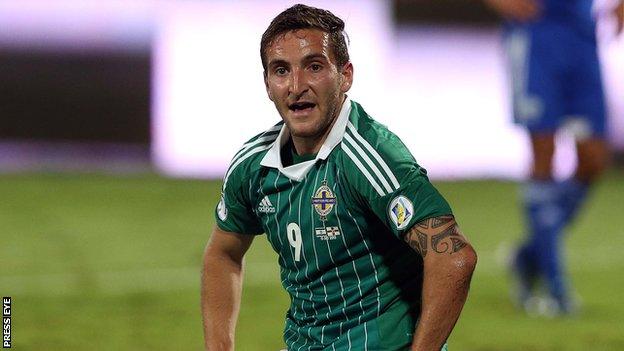 Huddersfield Town striker Martin Paterson has pulled out of the Northern Ireland squad for the forthcoming friendlies against Uruguay and Chile.

The Irish FA statement said that Paterson had been forced out after suffering a number of injuries throughout the season.

Paterson, 27, joins a list of senior players who will miss the games.

Alan Mannus, Lee Hodson, Chris Brunt, Ben Reeves, Pat McCourt, Kyle Lafferty and Will Grigg are also absent for the friendly matches against Uruguay in Montevideo on Friday, 30 May and against Chile in Valparaiso on Wednesday, 4 June, but Jonny Steele is recalled.

Lafferty's season with Palermo is ongoing, McCourt is currently without a club and Cathcart's future with Blackpool is uncertain.

Hodson has been struggling with a hip problem and Reeves did not play in the last five games of the season. Evans has also had ongoing injury problems.

Liverpool defender Ryan McLaughlin is back in the squad for the games in South America.

McLaughlin opted out of international football last summer to concentrate on his club career.

Portsmouth goalkeeper Trevor Carson, defenders Luke McCullough and Liam Donnelly and midfielder Paul Paton are the other uncapped players in the 22-man squad.

Donnelly, 18 and part of the youth set-up at Fulham that has been gaining considerable attention of late, has not made a first-team appearance in English football, while 20-year-old ex-Manchester United academy member McCullough has been playing for Doncaster over the past season.

Dundee United's Paton was called into the last squad - for the 0-0 friendly draw in Cyprus in March - as a replacement for Sammy Clingan.