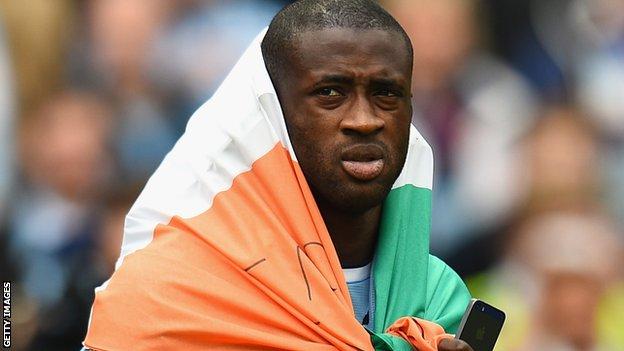 Yaya Toure has fuelled talk of a possible departure from Manchester City by saying he does not know who he will be playing for next season.

The midfielder's agent, Dimitri Seluk, indicated he could leave because he felt he had been treated with a lack of respect by the club's owners.

Now Toure, 31, has said "everything is open" when it comes to his future.

In an interview with global broadcaster beIN SPORTS, given on Monday before Seluk's comments had reached the public, the Ivory Coast star added: "Because of the brilliant season Man City have had, everybody is talking about me and everything is open.

"My agent, Dimitri, is always on the phone and he knows what he has to do because I trust him a lot.

Manchester City are understood to be relaxed about the situation and have no intention of selling or even listening to offers for a player who still has three years left on a contract he signed in April 2013.

There was no sense among those present in Abu Dhabi when the squad met Sheikh Mansour that Toure was upset, and he is believed to have exchanged handshakes with Mansour and City chairman Khaldoon Al Mubarak.

However, his future was thrown into doubt when his agent claimed that City's owners showed him a lack of respect on his 31st birthday on 13 May.

Seluk told BBC Sport that Toure was "very upset" and could leave City.

Toure initially played down the row on Twitter, writing: "Don't take words that do not come from my mouth seriously."

But he then posted a message that read: "Everything Dimitri said is true. He speaks for me. I will explain after the World Cup."

Toure has been an influential player for City since he joined the club from Barcelona in 2010.

His goals and leadership helped the club win the League Cup and Premier League title this season.

But he has often said he would like to a return to the Nou Camp.

"But we don't know because football is moving fast and you never know about tomorrow."

The Ivory Coast are one of 32 teams competing in the World Cup and have been drawn in group C alongside Colombia, Greece and Japan.