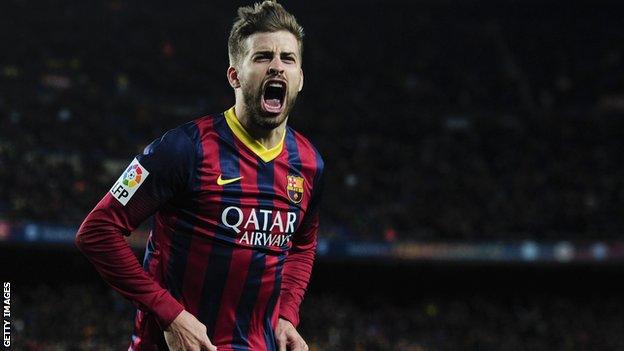 The 27-year-old, who is currently preparing for the World Cup with Spain, will now remain at the Nou Camp until 2019.

"Barcelona has to be at the top, win titles and feel important in the European and world elite," said Pique.

"We have got the team and the coach and we have got all the ingredients to do it again."

Since returning to Barca, where he came through the youth ranks, Pique has played 266 games, winning four Spanish titles and the Champions League twice but he ended the season disappointed after his side failed to win a major trophy for the first time since the 2007-08 season.

News of his signature comes days after the Catalan club announced Lionel Messi had signed a new deal and former player Luis Enrique was appointed manager.

German goalkeeper Marc-Andre Ter Stegen has also been signed at the start of a summer where experienced figures such as Victor Valdes, Carles Puyol and Jose Manuel Pinto will leave the Nou Camp.

In forming part of a team which won four La Liga titles in six years since 2008, Pique also established himself in the Spain national team which won the World Cup in 2010 and European Championship in 2012.