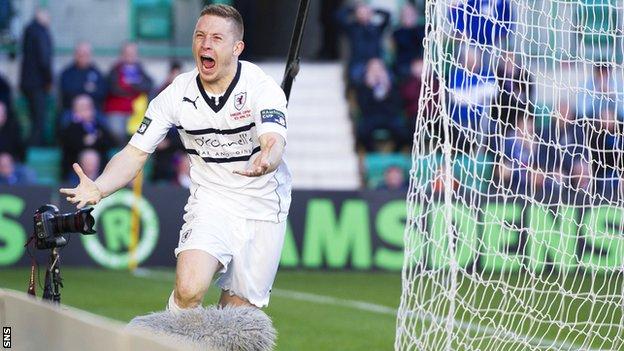 Striker John Baird has agreed to join Queen of the South for next season.

Baird has signed a pre-contractual agreement at Palmerston and will complete the move once his current deal with Raith Rovers runs out this summer.

The 28-year-old returned to Raith earlier this year and scored the winning goal in the extra-time victory over Rangers in the Ramsdens Cup final.

In between his spells in Kirkcaldy he played for Dundee and Partick Thistle when each side was in the top flight.

Queens reached the Premiership play-off quarter-final but were eliminated by Falkirk.

And, speaking to the club's website, Queen of the South manager Jim McIntyre described Baird as "a player I've admired for a long time".

"I'm delighted to finally get him," the manager said. "I tried to sign him when I was with Dunfermline but it didn't quite happen. He's a proven goalscorer at this level and I'm sure he'll get goals for us next season."

Baird added: "I'm happy to have agreed everything so quickly and committed myself to Queens. I can relax now and enjoy the summer but I'll be ready to go for pre-season."