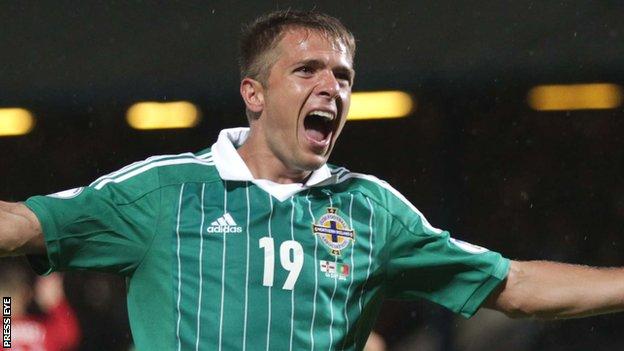 Derby County striker Jamie Ward has become the latest player to withdraw from the Northern Ireland squad for the friendlies in Uruguay and Chile.

Ward, 28, has been named in Derby's squad for Saturday's Championship play-off final against Queen's Park Rangers.

According to the Irish FA, he felt it was not in his best interests, or those of the national team, to go to South America after an extended club season.

Fleetwood midfielder Conor McLaughlin has been called into the squad.

McLaughlin will join up with manager Michael O'Neill's party after Fleetwood's League Two play-off final against Burton Albion on Monday.

Northern Ireland play Uruguay in Montevideo on Friday 30 May and then take on Chile in Valparaiso on Wednesday 4 June.

Ward's withdrawal is another blow to O'Neill, who had expressed his frustration at losing players.

On Tuesday, Huddersfield Town striker Martin Paterson opted out of the squad following a series of injuries this season.