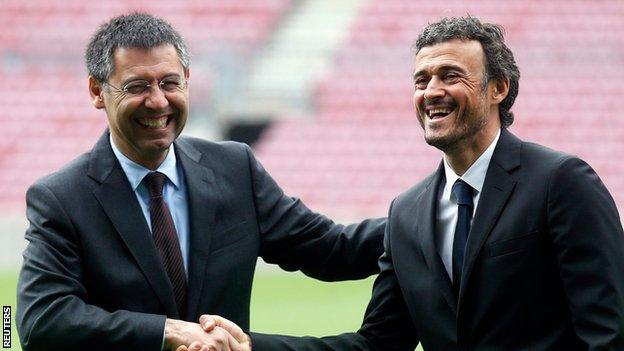 New Barcelona coach Luis Enrique says the prospect of managing "the best player in the world" in Lionel Messi was a key factor in taking the job.

Enrique, 44, signed a two-year deal on Wednesday to replace Gerardo Martino at the Spanish runners-up.

"Messi is essential for the group, he's unique. I hope to get the very best out of him," said the ex-Celta Vigo boss.

Argentina forward Messi, who has just signed a new contract, scored 41 goals in 44 matches for Barcelona last season, but failed to find his best form after a two-month injury lay-off midway through the campaign.

On arriving back in his home country on Tuesday ahead of the World Cup, he told reporters that he and his Barca team-mates had suffered from a "lack of energy".

He was beaten to the Ballon d'Or - the prize given to the world's best player - by Real Madrid forward Cristiano Ronaldo in January.

"I'm delighted I'm going to be managing the best player in the world - that's motivating me to be here," added Enrique.

"This season was not as incredible as his previous seasons but he's still number one.

"When he doesn't score 100,000 goals everybody thinks there is something wrong."

Enrique, who managed Barcelona's B team between 2008 and 2011 and also had a spell at Italian side Roma, was announced as Martino's successor on Monday.

The Argentine, 51, announced he was leaving the 22-time Spanish champions after they were beaten to the league title by Atletico Madrid on Sunday.

Atletico drew 1-1 at the Nou Camp to be crowned champions for the first time since 1996, finishing three points ahead of second-placed Barca.

It was the first time the club ended a season without winning trophy since 2008, with Martino's more conservative style of play often criticised by Barca supporters.

"I want to play attacking football - that's what Barca are identified with," said Enrique.

"That's why millions around the world have fallen in love with Barca's style, even if they are not Barcelona fans they love the attractive way Barca play.

"I'm going to bring certain things in but I'm hoping to get an attractive, yet effective, Barcelona."