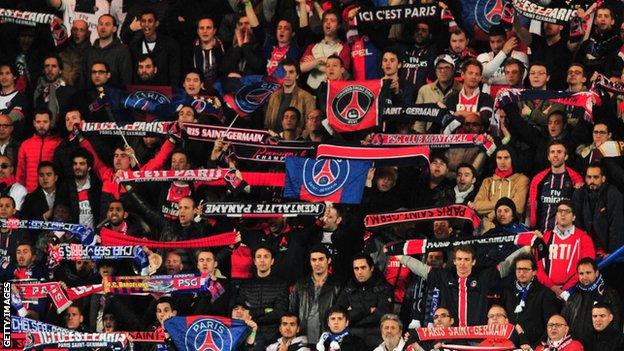 Uefa has opened disciplinary proceedings against Paris St-Germain over allegations that their supporters threw bottles and spat at disabled Chelsea fans.

The Chelsea fans sat below the home supporters during the Champions League quarter-final first leg on 2 April in Paris, which PSG won 3-1.

"The five Chelsea fans in question allege they were abused throughout the match, with one saying in her statement that she suffered a panic attack at the final whistle.

"At the Parc de Princes the Chelsea fans were placed directly in front of home fans, something that happens at three Premier League grounds. This case could force clubs to reconsider the location of their wheelchair sections."

Uefa has never before charged a team with abusing disabled fans.

Its disciplinary commission will decide on any punishment on 17 July.

The French champions have been charged under article 14 of Uefa's disciplinary regulations for "racism, other discriminatory conduct and propaganda".

If the allegations are proven, PSG face a fine and partial stadium closure at their first home match of next season's Champions League.

Chelsea won the second leg of this season's quarter-final tie at Stamford Bridge to knock PSG out on away goals.

Earlier this month, PSG were fined about £49m by Uefa and had the size of their squad capped for next season's Champions League for breaching financial fair play rules.