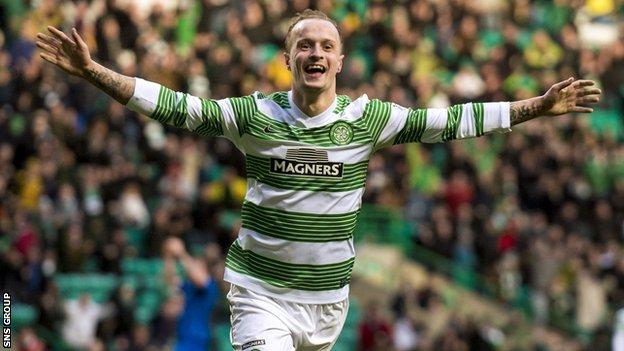 Leigh Griffiths' disciplinary hearing has been delayed to allow police to conclude their investigation into allegations of racist chanting.

The Celtic striker, 23, was on Thursday due to face charges of bringing the game into disrepute and acting against the best interests of football.

But there will be a two-week postponement while Police Scotland conclude their findings.

The Scottish FA will review the case on 5 June.

An SFA spokesman said: "At the request of his solicitor, the principal hearing date relating to the notice of complaint issued to Leigh Griffiths on Wednesday, 9 April has been adjourned until Thursday, 5 June, to allow for the conclusion of the ongoing criminal investigation by Police Scotland."

Griffiths was initially charged after being caught on camera singing "Hearts are going bust" in a pub full of Hibernian supporters before attending the Edinburgh derby on 27 April.

However, the SFA notice of complaint was updated after Police Scotland launched an investigation into further footage in which the Scotland international is seen as Hibs fans sing a song which refers to former Hearts player Rudi Skacel as a "refugee".