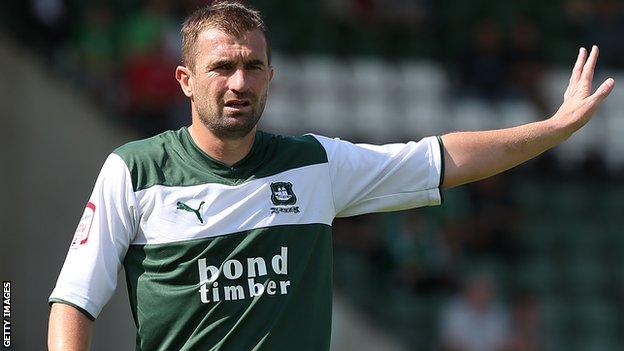 Plymouth Argyle stalwart Paul Wotton has agreed a new one-year deal to be a player-coach at Home Park.

The 36-year-old is Argyle's joint-second highest appearances maker after playing 491 times for the club.

"I am absolutely thrilled to be extending my career in the city where I was born with the club I have supported all my life," Wotton said.

"I can't think of a better situation for me next year than combining playing and coaching."

Wotton made his debut for the club as a 17-year-old in a 3-0 loss at Crewe in September 1996, and was part of the side which won the old Third Division in 2002 and the old Second Division two years later.

He left the club in April 2008 after injury problems and joined Southampton, before moving on to Yeovil in January 2011 and then returning a year later.

"Wottsy knows the club inside out and I think he's got something to give," said Argyle manager John Sheridan.

"His playing days are coming towards an end - he knows that - but he's got experience and know-how and I think I am making the right decision by keeping him as a player plus getting him involved in the coaching side.

"He's got his A Licence and I think there is something there for him.

"I trust him and think it will be good for us. He's played for Plymouth nearly all his life; everyone respects him; and his desire for the club to do well is a big plus."