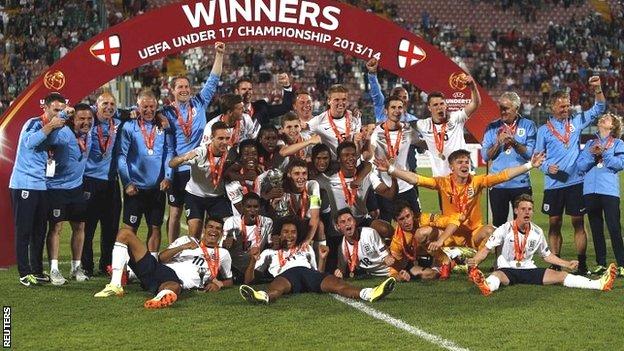 England won the European Under-17 Championship for the second time by beating the Netherlands 4-1 on penalties in the final in Malta.

Chelsea's Dominic Solanke fired England ahead from close range, but Jari Schuurman's volley on the stroke of half-time meant penalties were needed.

England were faultless from the spot, but Dani van der Moot and Calvin Verdonk failed to score for the Dutch.

England also won the competition in 2010, with a 2-1 victory over Spain.

Everton midfielder Ross Barkley, part of the senior squad for this summer's World Cup in Brazil, played in that final, in which Liverpool's Andre Wisdom and Connor Wickham, now of Sunderland, scored.

England had the better of the opening exchanges of this year's final, taking the lead in the 25th minute through Solanke's fourth goal of the tournament.

Fulham's Patrick Roberts delivered a corner which was not cleared and, when Taylor Moore - of RC Lens - drove the ball back into the box, Solanke took a touch before drilling clinically into the net.

But a superb flick from Steven Bergwijn allowed Schuurman to break through and level for the Dutch, winners in 2011 and 2012, from 15 yards.

Van der Moot and Roberts both had chances to win it late on, but neither could convert and the match went straight to penalties.

By that point, Everton's Ryan Ledson, Moore and substitute Callum Cooke of Middlesbrough had calmly found the net for England, allowing Jonjoe Kenny, also of Everton, to convert the match-winning penalty.

England Under-17 head coach John Peacock said his side were "worthy winners".

And on the penalties he added: "We've been practising penalties for the last two weeks and we've put in a few hours.

"It's never nice to lose on penalties - unfortunately we have been there before - but it's nice to have our turn to be successful."