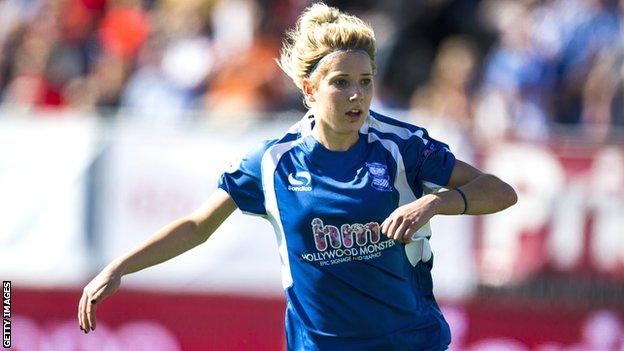 Birmingham City are top of the Women's Super League and Arsenal bottom after a 2-0 win for Blues against the Gunners.

Two goals by ex-Arsenal striker Kirsty Linnett added to the one she scored against her old club as Blues knocked them out of the Champions League.

Tucked in behind Blues in second place are Manchester City following their 2-0 victory over Everton.

Arsenal made the early running but it was Blues who went closest to taking the lead.

In the 15th minute Linnett had an 18-yard shot well stopped by goalkeeper Emma Byrne.

The keeper then had to keep out efforts from Jade Moors and Remi Allen as the visitors built up the pressure.

At the other end three minutes before half-time only a great save by keeper Rebecca Spencer prevented Kelly Smith's 18-yard drive from hitting the net.

But the deadlock was broken by Blues four minutes after the break, Linnett pouncing on a dreadful back-pass by Leah Williamson to roll the ball home.

The striker bagged her second goal when she latched on to Allen's 60th-minute through-ball to guide a low shot past Byrne.

Arsenal rallied in the closing stages but were unable to get a goal back.

The Gunners have reached the FA Cup final but are struggling in the league.

After being champions for nine successive seasons until last year, when they lost their crown to Liverpool, the Gunners are looking anything but champion.

But as City began to dominate Jill Scott and Steph Houghton both had shots kept out by keeper Rachel Brown-Finnis.

The home side went ahead when Johnston's 25th-minute cross-shot deflected off a defender to cross the line.

As the Toffees hit back Nikita Parris sent a long-range effort narrowly wide.

But they went a further goal behind as Scott sent a cheeky chip over Brown-Finnis in the first minute of the second half.

And though the visitors battled hard to put themselves back into contention, City played out the game comfortably.