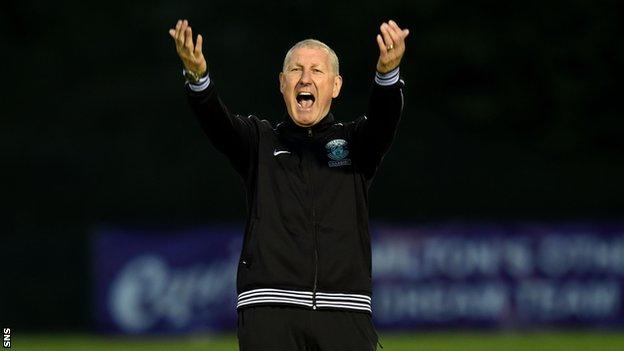 Terry Butcher has urged his Hibernian side to "finish the job" in their Premiership play-off against Hamilton.

Butcher told BBC Sportsound he wants his players to secure their top-flight safety at Easter Road on Sunday.

"We've got to go out and be professional," he said. "We want to make the most of it and finish the job."

Cummings scored either side of half-time to give Hibs the advantage ahead of the second leg but Butcher conceded it was tortuous watching from the touchline.

"It's horrible when you're on the sidelines watching it because there's so much at stake," he said.

"But it's a lovely feeling and I'm not being blase about it. This is a situation that we wanted to be in."

Butcher gave credit to the players for the way they responded following the 1-0 defeat to Kilmarnock that consigned Hibs to a play-off.

"It's only our second win in 20 matches and it feels really good in such an important match," he said.

"We've kept a clean sheet, scored two goals and changed the shape of the team because Hamilton were beginning to dominate the midfield. Fair play to them, they're a good little side and have some good players."

"Jason took his second goal really well and his first goal was a dream," he said. "We've had absolutely no luck in the last two or three months to be honest and there was nothing lucky about our second goal.

"It was a great little dink, a calm finish from someone so young. Before, that would've been cleared off the line and nothing been given.

"It's nice when they do go in. We didn't play fluently but it was a gritty performance and a steely performance. You need that in these games, high pressure games.

"The players have always stayed firm, have been resolute and shown great character. They've believed, I've believed and I think that showed tonight."

Looking ahead to the second leg, Butcher said: "It's going to be a bumper crowd and the fans will be there cheering us on, on a lovely surface as well. We want to make the most of it and enjoy the occasion."