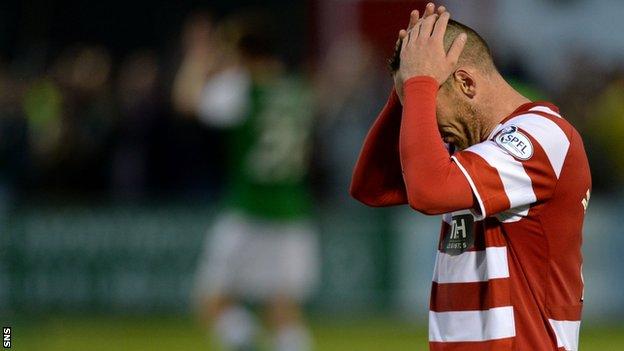 Alex Neil says Hamilton's Premiership play-off final with Hibernian is "not over" but recognises the need to score first in the second leg.

Two goals by Jason Cummings either side of half-time gave Hibs a 2-0 win in the first leg at New Doulgas Park.

"To keep the tie alive, we've got to go and start the game really well, get the first goal and then try to put Hibs on the back foot."

Neil praised the performance of the Championship runners-up against their top-flight opponents.

"We're disappointed because, particularly first half, we played really well," he explained.

"We were the better team, created the best opportunities and then we got hit on the counter-attack.

"I can't fault the players, I thought they worked their socks off. For large parts of the game, we controlled the ball. Just in the final third, I think our decision-making could've been a wee bit better.

"Hibs had two chances in the game and managed to put the two of them away. We had five or six opportunities and didn't take any of them,. That was the biggest difference.

"If we play like we did tonight and we take the chances we created then we're right in the tie."

But Neil added: "I won't blame the goalkeeper. He said it was moving all over the place so I'll take his word for it."