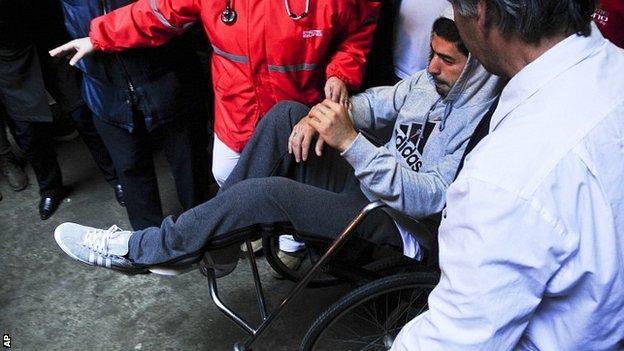 Uruguay striker Luis Suarez could play at the World Cup despite having surgery on an injured knee, according to the country's football association.

The Liverpool striker "suffered intense pain" in training on Wednesday and had an operation to repair meniscus damage.

"Suarez might be ready to play in Brazil," said the Uruguay Football Association (AUF) in a statement.

Estimates on his recovery range from 15 days to a minimum of four weeks with Uruguay's Group D opener on 14 June.

"Recovery from this surgery and the time taken to return to full function is dependant on individual patient characteristics, the type of operation performed, extent of the injury, whether there were any unexpected complications and, perhaps most importantly, the ability of the patient to commit to their rehabilitation.

"In short there is no one-size-fits-all approach and, as with any treatment, the management plan has to be tailored to the patient on an individual basis. The time they take to return to full function will reflect that."

They then face England in their second group game in Sao Paulo on 19 June.

The statement added that "no other damage to the knee was spotted".

Uruguay FA president Wilmar Valdez suggested if Suarez's recovery went to plan he could return to training in just over a fortnight.

"We know the surgery was a success and that the injury is not serious," he told Uruguayan newspaper La Ovacion. "We have to wait and see how he recovers.

"These are injuries that, considering Suarez's fitness and if the recovery is good, will not take long for him to return to play."

"Many thanks to all of you for your support," he said. "Relax, because I'll get there and work hard these days to be 100% to help my team-mates."

He added on his Facebook page: "The strength that my loved ones give me, which is very strong, will make me work hard to reach the World Cup."

Manchester United and England defender Phil Jones took 10 weeks to return to action after surgery on his meniscus - a wedge of cartilage that absorbs shock in the knee - in September 2012.

Suarez finished as this season's Premier League leading scorer with 31 goals, despite missing the opening five matches through suspension.

Former Liverpool and Germany midfielder Dietmar Hamann said Uruguay's World Cup chances would depend on Suarez's fitness but expected him to make a full recovery.

Hamann told BBC Sport it would be a "huge blow" for Uruguay if Suarez does not recover.

"I'm not sure they would be contenders without him," he added.

"If he is fit, which I expect him to be, he will one of the key players not only for Uruguay but in the World Cup."

Suarez finished as top scorer in the South American section of World Cup qualifying, scoring 11 goals as Uruguay finished fifth in the continent's nine-team group before winning a play-off.

He is also a proven performer at major tournaments, helping Uruguay to the semi-finals of the 2010 World Cup and scoring four times as his side won the Copa America the following year.