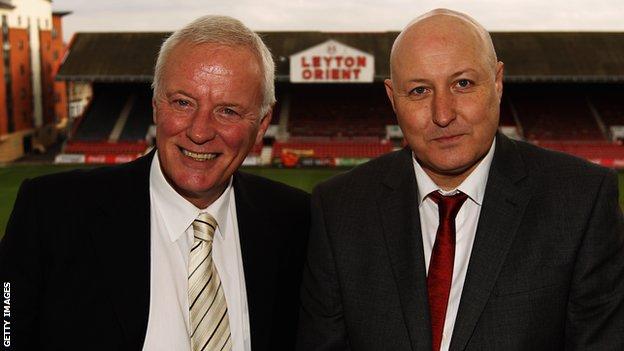 The O's face Rotherham United in the League One play-off final at Wembley on Sunday afternoon.

Hearn told BBC London 94.9: "Sometimes sport is not about money. It is about character, leadership, team philosophy, effort and the will never to give in.

"That comes from the top - the manager - to put that ethos into the team."

Statistics correct to 24 May

He continued: "I am sure other managers have done it but on the resources, the size of the club and things going on around us with the problems with the Olympic Stadium, it is a hell of a performance."

Slade was appointed manager in April 2010 and is now the fourth longest-serving manager in the top four divisions.

After seventh-placed finishes in 2011 and 2013, Orient challenged for automatic promotion this season before finishing third, and are now looking to secure a place in the second tier for the first time since 1981-82.

"Now we are looking at the greatest Cinderella story in British sport in some ways; a team which has been the underdog forever, a team of players that want it more so than any other team I have experienced and a manager who has done a job where superlatives fail me," Hearn said.

"People know I don't throw my money around and I'm never going to.

"Russell has bought into that philosophy and delivered, without spending a penny in the transfer market, a team which is right up there with one of the best Orient teams of all time."

Hearn said the 2-1 victory over Peterborough at the Matchroom Stadium last week, which booked Orient's place at Wembley, ranked "amongst one of the best days of all time".

The 65-year-old boxing, darts and snooker promoter first went to an Orient game aged 11 and took over the club during the 1994-95 season.

"You can't describe feelings like that; when you want something so bad and it actually does go right for you, which is quite rare," he said.

"It was a tide of the emotion and to see all those fans on the pitch belies description.

"Most of the things we do in life are money-orientated, especially in sport these days, but that was just one of those rarities where you say 'I really couldn't buy this'.

"In the 20 years I have been in charge we spent a lot of that time looking over our shoulders at the Conference, never mind thinking about the Championship.

"We were thinking about how you get out of Division Two, and that was tough enough, but we had our day at Oxford [in 2006] - another one of those legendary moments that football seems to throw up."

Hearn has backed Orient's players to create another memory at Wembley on Sunday.

"You are not entitled to anything in life. You are only entitled to what you earn," he said.

"This team have earned the right to be playing in the Championship next year. I believe on Sunday that is what the result will be.

"As soon as the Froch-Groves fight is over I'm going to Las Vegas with the boys. We will have a big party for a few days and will be a nice way to finish what has been a memorable season."