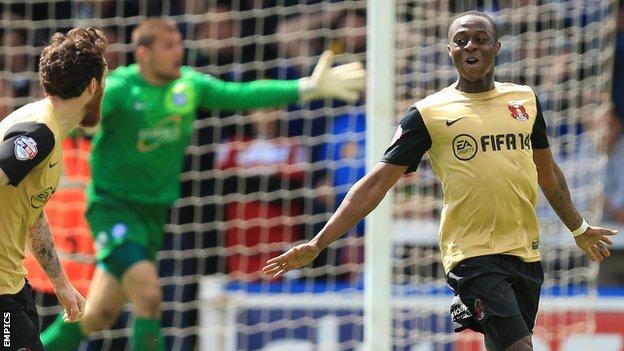 It has been 32 long years since Leyton Orient last played in the second tier of English football.

Only Rotherham United now stand between them and a place in the Championship and one important cog in their promotion push has been a 20-year-old winger.

Moses Odubajo has been an ever-present for the O's this season, scoring 11 league goals and also contributing several assists as the east London club finished third in the League One table.

"I'm a little bit surprised he has not had a call-up for England Under-20s or Under-21s as he has had a magnificent season," Slade told BBC Sport.

"I know they've watched. He must be on the brink. His level of consistency for a 20-year-old has been phenomenal.

"The fact he has made over 100 appearances in his career - there are not many 20-year-olds who have done that at any level in the country. He is still very level-headed and has a fantastic attitude.

"He keeps himself grounded and has a good group of experienced players around him that will always give him the right advice.

"There are only good things round the corner for Moses."

Odubajo's recent performances saw him rewarded with the Football League's Young Player of the Month for April.

"When I got the phone call I was shocked that I was even in contention to win it," he said.

"I was just focusing on the team, to get as many points as we could and finish as high as we could. I don't even look at my own form like that.

"It's been an important season and I'm learning every game.

"The gaffer has always believed in me and said he will never get angry at me for taking a man on or losing the ball in the final third. Knowing that is good."

Orient were the early pace-setters in League One this season, making their best-ever start to a campaign a they won their first eight matches.

Their automatic promotion challenge fell away in the spring as Wolves and Brentford grew in strength, but the side comfortably secured a play-off place and booked a place at Wembley with a 3-2 aggregate win over Peterborough in the play-off semi-finals.

"I think we are capable of one more big push to get us over the line," Slade said.

We have a very good group. It is important for me to put the right types of players together. If any group deserves success it is them

"I have been really pleased with how the players have responded to being in the play-offs, having been in the top two for most of the season.

"You look at what teams are in the Championship and for Leyton Orient to be there - a small East End club - would be an absolutely magnificent achievement."

The 53-year-old is the fourth longest-serving manager in the top four divisions, having been appointed by Orient in April 2010.

The former Grimsby, Yeovil and Brighton boss has a small, but tight-knit squad, where team spirit and character is valued just as highly as ability on the pitch.

"It's very important to me to try to interview all the players that I sign," he said.

"We have a very good group. It is important for me to put the right types of players together.

"I'd rather lose that little bit of quality and gain the man; someone who over a long season will go the distance.

"I am very proud of them. They are a great group who interact with each other, do many things together and stick together. If any group deserves success it is them."

Orient were beaten 4-2 by Blackpool in the Division Three, now League Two, play-off final in Cardiff in 2001, their last appearance in an end-of-season showpiece occasion.

And for Odubajo, who came through the club's youth ranks, it would be "a massive achievement" to cap his season with promotion at Wembley.

"Not many people can do that in their career," he added.

"I couldn't imagine how big it is for some of the fans who come week in, week out. We've sold about 22,000 tickets for Wembley so it is going to be a great atmosphere.

"We've done ourselves proud and hopefully we can go all the way."