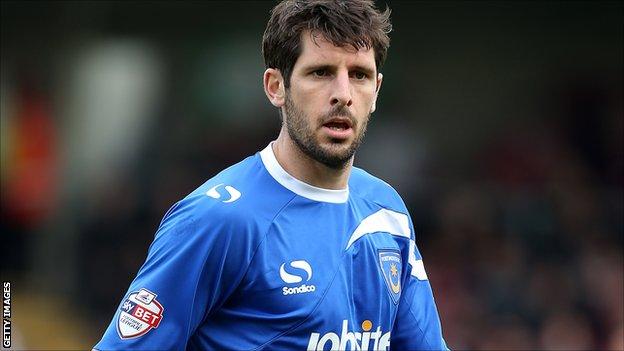 League Two side Portsmouth have completed the signing of midfielder Danny Hollands on a two-year deal, with the mutual option of an extension.

Hollands, 28, was a free agent after his contract at Charlton ended.

He scored five goals in seven appearances during a loan spell at Fratton Park last season.

"I made it quite clear at the end of last season that I really enjoyed my time at Portsmouth and it just felt right," Hollands told BBC Radio Solent.

Hollands began his career at Chelsea before moving onto Bournemouth and Charlton but spent much of last season on loan at Gillingham and Pompey.

And he admitted after an unsettling season he had lost his love for the game before Pompey came calling.

"The last 18 months with Charlton was not very good," he said. "I'd lost my buzz with football and as soon as I walked through the door at Fratton Park I got that back. I'm proud to be a Portsmouth player.

"I believe this is a club going forward. I'm thankful Portsmouth have given me a contract and I hope I can repay them."

Portsmouth manager Andy Awford hailed the signing and believes he will be a key member of his squad next season.

"I'm delighted. I think everyone saw the impact Danny made at the end of last season," said Awford.

"He's a good lad and a seasoned professional - it's a great addition to our squad.

"There were other offers on the table because of what he'd done here, but he always wanted to come back to Pompey.

"There's a big challenge ahead of him and I think he can improve even further. We can get even more out of him.

"We hope he can flourish here next season and become even more of a favourite with the fans."