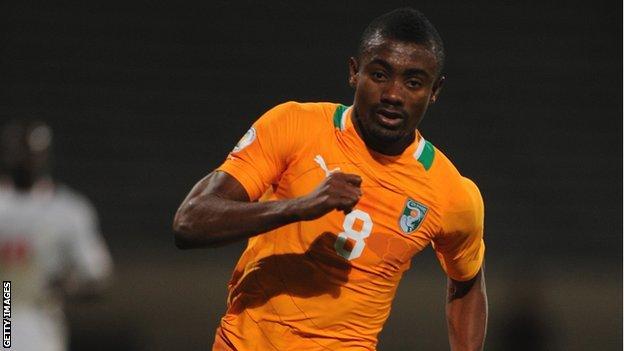 Salomon Kalou used be woken up at five o'clock every morning by a knock at the door from Kolo Toure.

"He wanted to go and train one against one," Kalou told BBC Sport. "We were only teenagers but I remember it like it was yesterday."

Like both of the Toure brothers - Kolo and Yaya - Kalou began his football career with the academy at Asec Mimosas in the Ivorian city of Abidjan.

In fact most of the players who will start against Japan in Ivory Coast's opening match of the World Cup in Recife on 14 June have known each other for nearly two decades.

"I joined the academy in 1997 and Yaya was already there and Kolo, too," said Kalou. "We've had at least 17 years of playing together.

"We always want to lift each other and make each other get better. I can't thank Kolo enough for knocking on my door every morning.

"As a kid you don't realise how important that is but now I realise it is vital to have people to push you to your limit."

In Brazil, Ivory Coast will be aiming to qualify for the knockout stages for the first time in their history and they have been drawn in a group - along with Colombia, Greece and Japan - that appears to give them a great chance of progressing.

Kalou also feels that the relationships the players have forged since they were youngsters could make all the difference.

"I remember the last qualifying game against Senegal and the assist Yaya Toure gave me for the last goal," Kalou said.

"I knew that his first intention wasn't to pass the ball to the first striker who called for the ball because I know that he always has that second touch to try to play the perfect ball.

"So I waited a little bit and I ran at the right moment to receive the ball and score the goal.

"That can change the game so it's important to have that kind of understanding on the pitch, and off the pitch as well, because it can help us to win the game.

"I know how they play, I understand their game and how they want to give the ball. Sometimes it's very important to have those feelings in an important game."

Despite the fact that he was part of a Chelsea team that won the Champions League, a Premier League title and four FA Cups, Kalou admits he has sometimes been in the shadow of the other stars of Ivory Coast's so-called golden generation.

But he has developed and matured since he joined French side Lille and in World Cup qualification he was the top scorer for Sabri Lamouchi's side, with two crucial goals in the play-off against Senegal, which the Elephants won 4-2 on aggregate.

"That's what I've learnt at Lille, playing for this club I knew couldn't hide behind a Yaya Toure or a Didier Drogba," he said.

"Being at Chelsea was an amazing experience, I arrived there young and I was surrounded by big players and big brothers so I was kind of the little kid.

"I was well protected by players like Didier and when things were bad at Chelsea I was not the one to take the blame.

"At Lille that's not the case; if Lille is not going right, I'm taking the blame. I've learnt through tough experiences. I knew I couldn't hide anymore. Lille changed the way I see things and I'm not afraid of going forward and showing that I can bring a team to the top level.

"In the World Cup qualifiers I finished with five goals for Ivory Coast and finishing as top scorer in the qualifiers was a good moment because it's something that I pushed myself to achieve.

"Usually I wouldn't be among the top scorers but scoring those important goals was a challenge.

"I pushed myself to do that and if we're going to do well at the World Cup we have to push each other. Pushing Gervinho, pushing Didier (Drogba) pushing Yaya is good for the team because we'll get the best out of each other."

For all their success at club level, the likes of Kalou, Gervinho and Yaya are yet to win a trophy with Ivory Coast.

The Elephants were runners-up at the Africa Cup of Nations in 2006 and 2012 but with the likes of Drogba and Kolo approaching the end of their careers, this could be the final chance for the current group to make an impact on the world stage.

"People would like to see that generation winning something," Kalou says.

"The generation of Drogba, Didier Zokora and Kolo are a little bit older than us but what they did so well was to bring the team to their level because nobody did it before; Ivory Coast had never qualified for a World Cup before that generation.

"I think they have done brilliantly for the country. Today Ivory Coast is the highest ranked African team on Fifa's list so that's a big achievement.