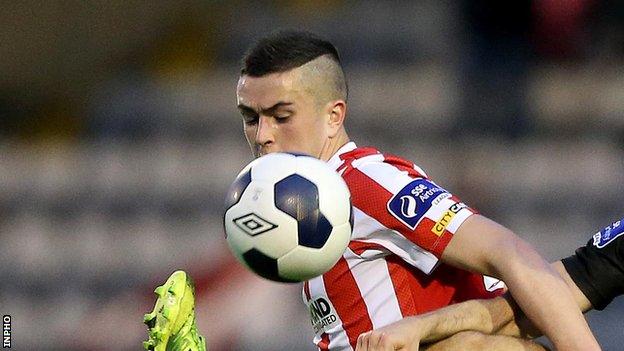 Michael Duffy volleyed in the opener in the 21st minute after Barry McNamee had played the ball over from the edge of the penalty area.

Keeper Gerard Doherty made a fingertip save from Daire Doyle's dipping 25-yard shot to keep Derry in front.

Patterson side-footed in the second goal with 66 minutes gone.

Patrick McEleney set it up with a surging break forward from deep and, when he curled the ball across, Patterson got a faint touch to beat United keeper David Ryan.

Late on, Derry felt they should have had a penalty, claiming Patterson had been pushed by Ciaran McGuigan, but referee Derek Tomney waved play on.

It was Derry's first win in seven Premier Division games and the three points will be a timely boost for former long-serving player Hutton.

Earlier this month, he took over from Roddy Collins who left after just six months in charge.

As a result of Friday's win, Derry move above Drogheda, and they are now sixth on goal difference, just ahead of Bray Wanderers who lost 2-0 at home to Cork.