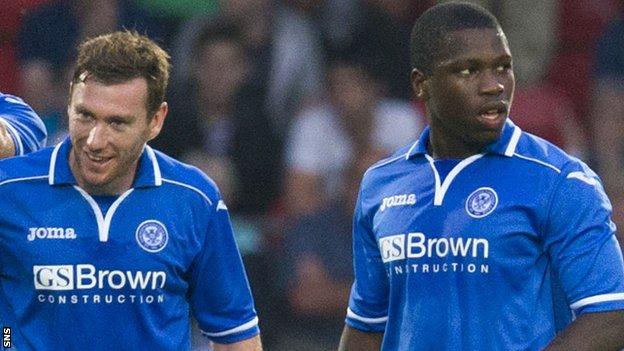 Anderson, 28, has agreed a new two-year contract, while fellow defender Miller, 27, and goalkeeper Banks, 42, have been given 12-month deals.

And Tommy Wright's advisor will meet chairman Steve Brown on Friday to discuss new terms for the manager.

Wright said: "I'm expecting to sign a new deal over the next few days."

Brown had spoken of his desire to extend the Northern Irishman's contract after Saturday's 2-0 win over Dundee United secured the Saints first-ever national trophy.

"The chairman knows that I want to be stay longer than the year I've got left and hopefully that will be sorted in the next few days," the manager told BBC Scotland.

Forward Hasselbaink and midfielder Cregg are the most surprising exits, having both been regular starters for the Scottish Cup winners.

Hasselbaink, 23, joined from St Mirren in summer 2012 and made 39 appearances this season, scoring six times.

Cregg, 28, formerly of Arsenal, Falkirk, Hibernian, Morton and St Mirren, has been at McDiarmid Park for the same length of time after leaving Bury.

Defender Clancy and striker Iwelumo have been on the first-team fringes in Perth.

Much-travelled former Scotland cap Iwelumo has only made seven substitute appearance since the 35-year-old switched to St Johnstone from Scunthorpe in January.

And Clancy, 29, made just four appearances, having joined Saints in February after his release by Hibs.

Anderson, who scored in the final at Celtic Park, earns his new deal as he celebrates his testimonial year with the Perth club.

Miller arrived at McDiarmid Park from Ross County in 2012.

Banks, formerly of Gillingham, Blackpool, Bolton Wanderers, Wimbledon and Hearts, has been back up to Alan Mannus as well as undertaking coaching duties since arriving from Dundee United last summer.