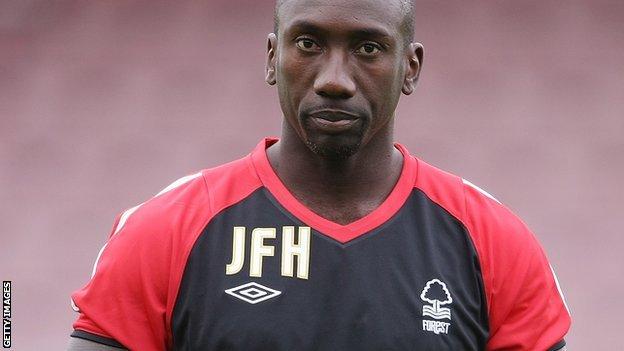 Former Chelsea striker Jimmy Floyd Hasselbaink wants a manager's job in England after turning down a new deal with Belgian side Royal Antwerp.

The 42-year-old joined the Belgium second-tier side in May 2013 after 18 months as a coach at Nottingham Forest.

"I was offered a new contract but I have not taken it," Hasselbaink told BBC Sport. "At this moment I am looking for opportunities.

"I am open-minded but the perfect scenario would be a job in England."

Antwerp finished seventh in the league last season and Hasselbaink, who first moved to England when he joined Leeds United in 1997, commuted to the continent from his Surrey base.

But he would welcome a job back in his adopted home.

"I still live in England, my wife is English and my kids go to school here so that would be the best and easiest option," Hasselbaink added.

"I want an exciting challenge that I know I can make better off the field and on it."

The former Dutch international, who also played for Atletico Madrid, Middlesbrough, Charlton and Cardiff City says he would look at offers from down the league structure as long as the "project" was right for him.

"I would be happy to consider it if it is an exciting project," Hasselbaink added. "At Royal Antwerp I basically did everything - fitness, recruitment, tactics - everything. Now I am ready to take a job with more staff."