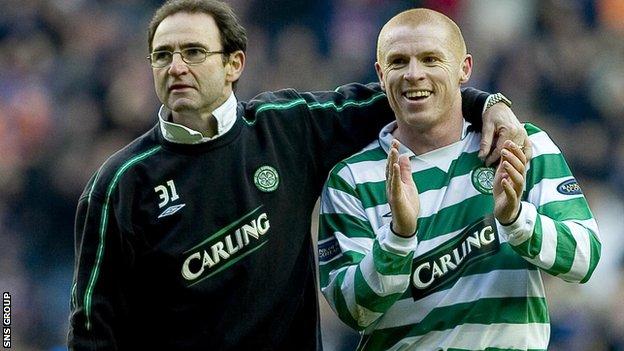 Lennon, 42, has left his post at the Scottish champions, saying he is ready for "a new challenge".

"He has had the experience of managing what I believe is one of the best clubs in the world," said Republic of Ireland manager O'Neill.

"He has taken that on and that will stand him in great stead for the rest of his career."

O'Neill was in charge of Aston Villa and then Sunderland after his time at Celtic Park, and is confident his fellow Northern Irishman would do well in England.

Lennon, who won a hat-trick of league titles in four years as manager, was strongly linked with Norwich, who have opted to keep Neil Adams on, while West Brom and Brighton have been mentioned as possible destinations.

"Neil has done very well," added O'Neill. "Obviously, I know him particularly well because I signed him twice as a player, once to Leicester City and once to Celtic, and he did exceptionally well for me in both spells.

"He's had a very good time at Celtic, particularly the year where they did brilliantly in the Champions League (reaching the last 16 in 2013)."

Former Celtic striker Henrik Larsson, currently in charge of Swedish side Falkenbergs, is the bookmakers' favourite to succeed Lennon.

"I can see myself back at Celtic, whether it's now or in the future time will tell," Larsson told STV.

"I have and always will have a strong affection with the club. It's not a question whether I'd be up for it. At the moment I'm only focusing on the job at Falkenberg."

O'Neill managed Larsson as well as Lennon during his five years at Celtic.

"Larsson was just phenomenal as a player," he said. "Just when you were in a tight spot in many a game, you just looked to him and he would pull you out of it, so he was really terrific as a player.

"He then went on to great things as well for short periods at Barcelona and at Manchester United to prove that he could score goals in any part of Europe, and again that was terrific.

"He's had a little time as well as a manager in his own country, and if you say they have stopped taking bets on it and that he is a very, very strong favourite, why not?

"He would be a great fit for Celtic again."