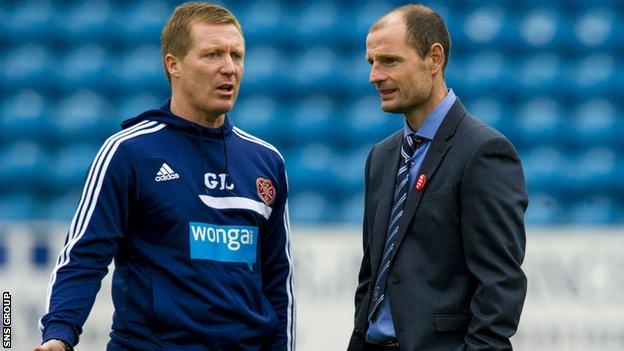 Locke, 39, was not offered a new contract when Ann Budge completed her takeover at Tynecastle.

But he resumes his coaching career at Rugby Park, where he played from 2002 until 2009.

Sandy Clark was assistant to Allan Johnston last season but has since moved to a similar role at Albion Rovers.

The 57-year-old was number two to Johnston at Queen of the South before both moved to the Ayrshire side last summer.

Johnston struggled in his debut campaign as a top flight manager but Killie won their final two matches to finish ninth in the table - four points above the play-off place.

Hearts were relegated, having started the season with a 15-point deduction for entering administration, but there was a late rally in form with Locke winning the manager of the month award for April.

Locke's position at Hearts has been taken by Robbie Nielsen, with Craig Levein installed as director of football.

Johnston and Locke were team-mates at Hearts and Kilmarnock during their playing days.

"I'm sure they will be a good team," chairman Michael Johnston told BBC Scotland.

"They were both very determined as players and they want to win every match. I'm sure they will instil the same attitude in our team.

"Gary had huge challenges thrown at him at Hearts and it was clear he wasn't going to let that get on top of him. He and his squad showed tremendous fighting spirit."