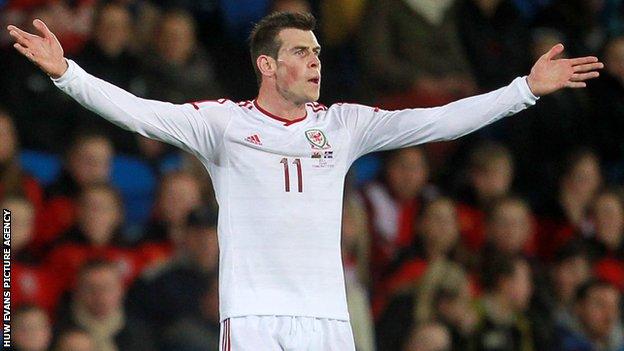 Wales will be without star player Gareth Bale for the 4 June friendly against Netherlands in Amsterdam.

The Football Association of Wales confirmed that the Real Madrid forward, 24, has been "troubled with a leg muscle injury for a few weeks".

Arsenal's FA Cup winner Aaron Ramsey has been rested, so Wales will face the Dutch without their two leading players.

However, Wales were boosted earlier in the week by the addition of defender Chris Gunter.

The Reading player had not been included in Coleman's original squad because of injury.

But the 24-year-old has recovered sooner than expected and declared himself fit to join up with the squad.

It will be a really tough game for us but one that will be a good experience and it's our last friendly before our qualifiers start. It's a big game

"I am delighted that Chris is joining up. He has a wealth of experience for a young player, he has a fantastic attitude," Coleman said.

Full-back Gunter had revealed on BBC Radio Wales Sport he was available for the friendly at the Amsterdam Arena despite not being included in the 23-man squad announced on Thursday.

"I was carrying a bit of a problem for the last few weeks of the season with Reading and was just trying to manage it," Gunter said.

"But I've been looking after it over the last few weeks and spoke with the manager so I'm pretty sure I will be in the squad as long as there's no reaction.

"There's no way I will be missing that game."

Wales' friendly against Louis van Gaal's World Cup-bound side will be their final friendly ahead of the opening Euro 2016 qualifier against Andorra in September.

Gunter played in Wales' last game against the Dutch, a 2-0 defeat in Rotterdam prior to the 2008 European Championships.

"We played them a few years ago and it was a really good experience," the former Cardiff City, Spurs and Nottingham Forest defender said.

"They'll all be gearing up to go off to the World Cup so they'll be making sure they will be playing as well as they can to be in the starting 11 for the opening game.

"It will be a really tough game for us but one that will be a good experience and it's our last friendly before our qualifiers start. It's a big game."