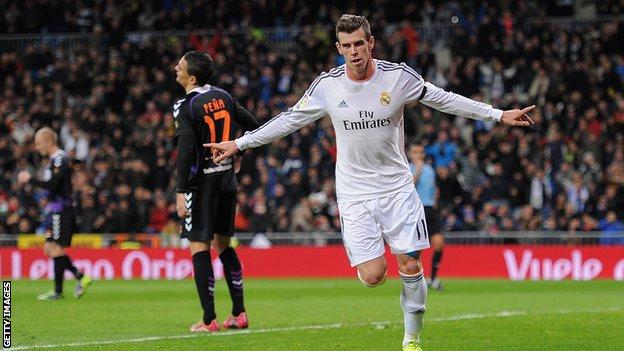 Pike was still a professional at the time and spotted the potential in the Real Madrid star straight away.

"We did a crossbar challenge not far from where I live...he was only eight or nine - he beat me 10-8 and I was trying."

I said to my sister, 'however much this is costing you in travel expenses you'll get it back and more, so keep taking him [Bale] to Southampton'

After his humiliation by the eight year-old, Pike recalls giving Bale's mother some sound advice.

"I said to my sister, 'however much this is costing you in travel expenses you'll get it back and more, so keep taking him to Southampton'," said Pike.

Welsh international Bale has gone on to fulfil his early promise and is in line to start for Real Madrid in Saturday's Champions League final against Atletico Madrid.

There had been fitness concerns after the 24-year-old sat out a training session on Tuesday, but Pike told Radio Wales Sport that Bale and Real's other injury concern Ronaldo should be fine.

"They had to wrap the two of them in cotton wool because obviously Madrid didn't want both of them out."

Pike will not be joining the family group going to watch Bale in Lisbon.

"I'm not going, my son has GCSEs so I didn't think it was fair that I'd go out and leave him," said Pike.

"My father's going [Bale's grandfather], and half a dozen of the family are going so I'll be cheering on at home.

"I'll probably watch it with my son. He'll be sat there with his Bale shirt on cheering away.

"I think that's as special as going out with friends and family down the pub.

"We'll just be watching it quietly - well, not too quietly - at home."