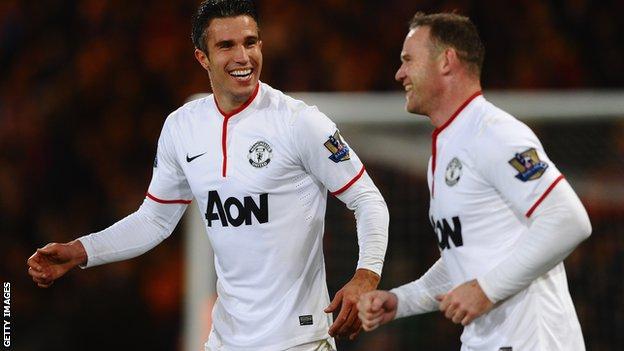 With defender Nemanja Vidic having left the club, new boss Louis van Gaal must appoint a skipper when he takes over after the World Cup.

Rooney, 28, said: "I am interested in the captaincy. I feel I am ready, but it's the manager's decision."

Vidic, who has led United since 2010, joined Inter Milan, and vice-captain Patrice Evra also looks set to depart as his contract expires this summer.

"I've captained United a few times and to get it on a full-time basis would be great," said Rooney, who moved to Old Trafford in 2004.

But the England forward said he would have no problem if Van Persie, 30, got the job.

"Robin is captain of his country, he has captained Arsenal and if he gets the nod, I'm sure he'll do a great job," he said.

Rooney was United's top scorer in 2013-14 with 19 goals, but the former Everton man concedes his place may come under threat unless he impresses Van Gaal.

"When a new manager comes in, you always feel you have to prove yourself over again," said Rooney, speaking at England's pre-World Cup training camp in Portugal.

"When we go back into training, it will be like a new start and you've got to prove yourself again to make sure the manager picks you."