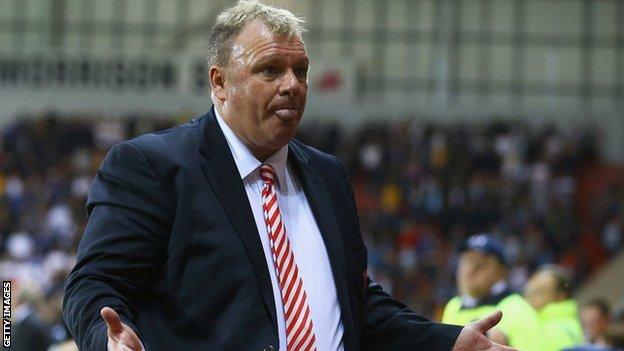 Rotherham manager Steve Evans admits he and Leyton Orient boss Russell Slade have been playing mind games before the League One play-off final.

In the build-up to Sunday's match, both managers have claimed their opponents are the favourites for promotion.

Rotherham are looking to become the first team to earn promotion from League One having come up from League Two the previous season since Peterborough achieved the feat in 2008-09.

The teams finished level on points and their two games in the regular season ended in narrow home victories.

"I said they'd win, he said we would and I think we're both playing a little game," Evans told BBC Radio Sheffield.

"I think we both accept that there is nothing in it and I don't think it would be a shock to anyone if either side won.

"When you are on identical points after 46 games and the aggregate score between the two sides is 2-2 then you know it is going to be close.

"I think maybe they have a little more to prove because they led the table for a number of months with some super displays. That's why I'd just edge them as favourites."

Evans guided the side to promotion from League two last season, his first with the club, and is looking to emulate Ronnie Moore's Millers side that achieved back-to-back promotions in 1999-00 and 2000-01.

Prior to joining Rotherham, he led Crawley out of the Conference Premier before leaving them in April 2012 with the Red Devils on the verge of a second successive promotion, eventually sealed under Craig Brewster.

The 51-year-old Scot believes his success is down to putting well-balanced squads together.

"Members of the press tell me that it is unprecedented," he added.

"I think it all comes down to hard work, endeavour and spirit, but you also need the ability to identify talented players and put a good group together.

"I didn't see many people queuing up to sign Kieran Agard two years ago and Ben Pringle had been on the free transfer list before we came in."