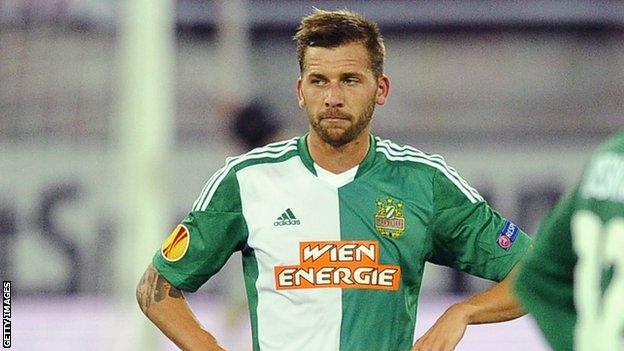 He joins the club relegated from the Premier League on a three-year deal and is manager Ole Gunnar Solskjaer's second summer recruit.

The 6ft 1in Burgstaller helped Rapid Vienna to finish second in their top flight in 2013-14.

"My decision to join Cardiff City was never in question when the club first contacted me," said Burgstaller.

"It has always been a dream for me to play in this country.

"I've followed Cardiff in the Premier League last season and I'm very proud and honoured to be given the chance to wear the Cardiff City jersey - I'm a big admirer of the passion of the fans."

Burgstaller joined Rapid Vienna in 2011 after starting his career at FC Karnten before joining SC Wiener Neustadt in 2008, where he scored 12 goals in 81 goals appearances.

He has made 95 Rapid Vienna appearances in all competitions, scoring 25 goals, including 12 goals in 35 games last season.

His international debut came in 2012 against Germany in a World Cup qualifier.